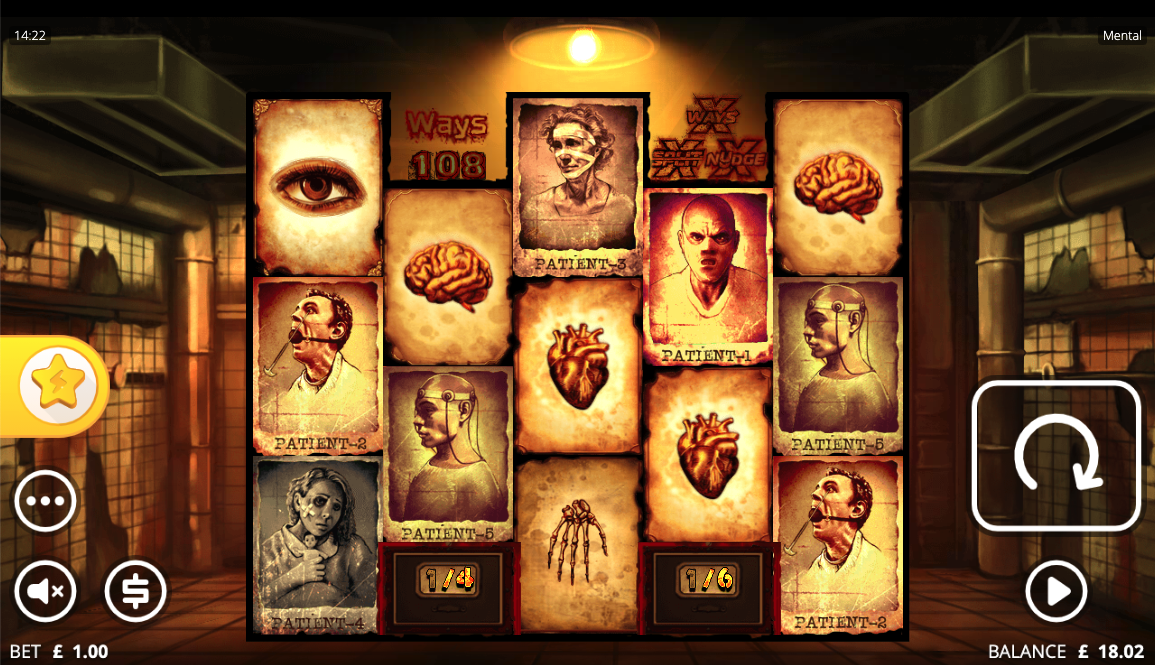 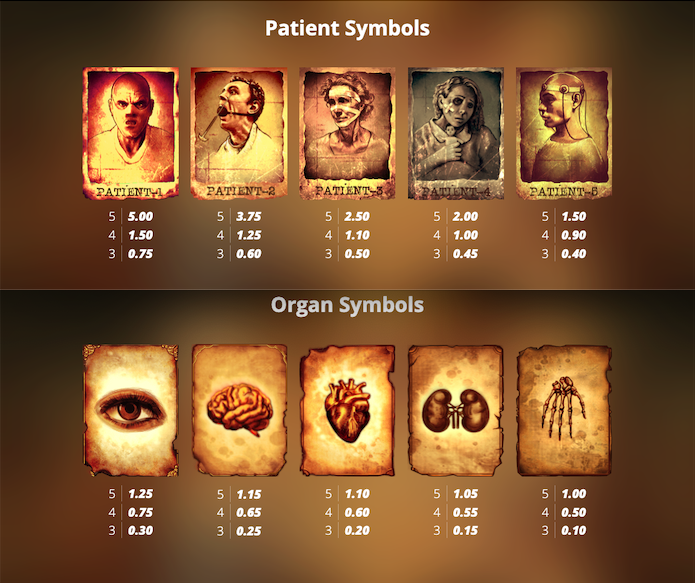 Welcome to what may be one of the scariest online slots we’ve ever encountered – it’s called Mental, it’s developed by Nolimit City and it appears to take place in some grimy institution where the spectre of human experimentation looms over the unfortunate inmates. If you’re brave enough to try it out there are Fire Frames, Enhancer Cells, three different free spin rounds and the Mental Transform feature.

Mental is a five reel slot with 108 paylines and it plays out on the 3-2-3-2-3 setup you can see above; The scary sounds and the flickering light bulbs contribute to the unsettling atmosphere which is reminiscent of survival horror video games such as Silent Hill.

The five high value symbols are five inmates labelled Patients 1 – 5, some attached to various medical devices; the five lower values are bits of the human body – eyes, brains, hearts, kidneys and a skeletal hand. The special symbols include the wild, the dead patient, the spider, and the scorpion.

On each spin between one and thirteen positions will be surrounded by fire and each one will split into two matching symbols – the number of total paylines will increase and be shown above reel two.

If four or six positions are surrounded by fire than the cells below reels two and four respectively will reveal one of the following enhancers:

Landing a spider on reels two or four will kick this off and it will then transform into an xWays, xSplit, Dead Patient, Wild or inmate.

When two Dead Patient symbols (gravestones) land it they will be replaced by an inmate with a multiplier attached of between 5x and 9999x.

This is triggered by landing three scorpion scatters anywhere in view for which you’ll receive eight spins plus one for each scorpion inside a Fire Frame; on each spin up to five positions will get Fire Frames and they’ll lock in place until the round ends.

There are two ways to trigger this – with three scorpions and one spider in the base game or by landing a spider in the Autopsy free spins. These are similar spins except that the spider will lock in place and trigger the Mental Transform on each spin. There’s also a rather complicated Dead Multiplier feature based on the Dead Symbol multipliers in which those values are collected and transferred back to the respective patients until the count runs down.