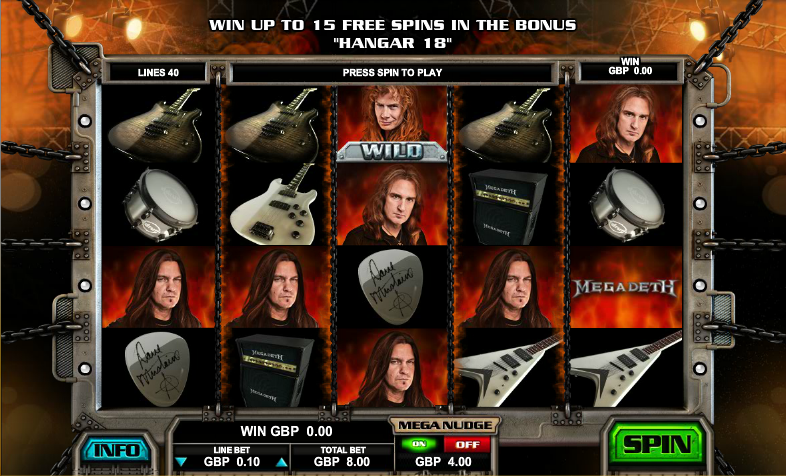 Are you a fan of American heavy metal? Are you familiar with the guitar work of Dave Mustaine, the only founder member of Megadeth still in the group?  If so you’ll appreciate this online slot machine from Leander Gaming with it’s heavy metal-theme and clever bonus games.

There’s a very metallic feel to proceedings; the reels are held in place by a number of chains and the backdrop is stage scaffolding.  It’s a five reel, forty fixed payline machines and all the symbols have a similar theme – the low value ones are a guitar pick, a speaker, a drum and then three different guitars; the high value symbols are the band members – Chris Broderick, Shawn Drover and David Ellefson – and a Megadeth logo.  Mustaine himself is the wild symbol while a stylised skull (Vic Rattlehead) is the bonus symbol.

One of the innovative features of this slot is the ability to switch on and off this ability.  It costs the player extra (40x the line bet) but allows the game to auto-nudge up to three times on reels two, three and four to get the best win possible.  Leander states that this reduces the house edge to 3% from the 5% without auto-nudge.

If you can land three of the bonus symbols on reels one, three and five the big bonus feature cranks into life; you will be whisked to the Mega-Wheel which you spin to reveal which of the three games you will play.  They are as follows:

Hangar 18 Free Spins – you will receive 5 – 15 spins depending on how the Mega-Wheel landed; wild Mustaine is now sticky so each one you land remains in place until the bonus game is over.

Head Crusher – this is a slightly unnerving game in which you are faced with sixteen prisoners with bags over their heads.  Your initial bet is subject to a maximum multiplier and you must pick one at a time; each time you choose a male prisoner the prize pot decreases.  When you pick a female prisoner the game stops and you receive the remaining cash prize.

Even if you’re not a heavy metal fan this is a creative game with lots of winning chances; the music is of the genre but not too intrusive and of course you can always click the mute button.  The fixed paylines mean that the minimum bet is £0.40 and the maximum is £200.00 per spin.  Add the auto-nudge feature and that rises to £400.00.  The only thing missing is the ability to Autoplay.