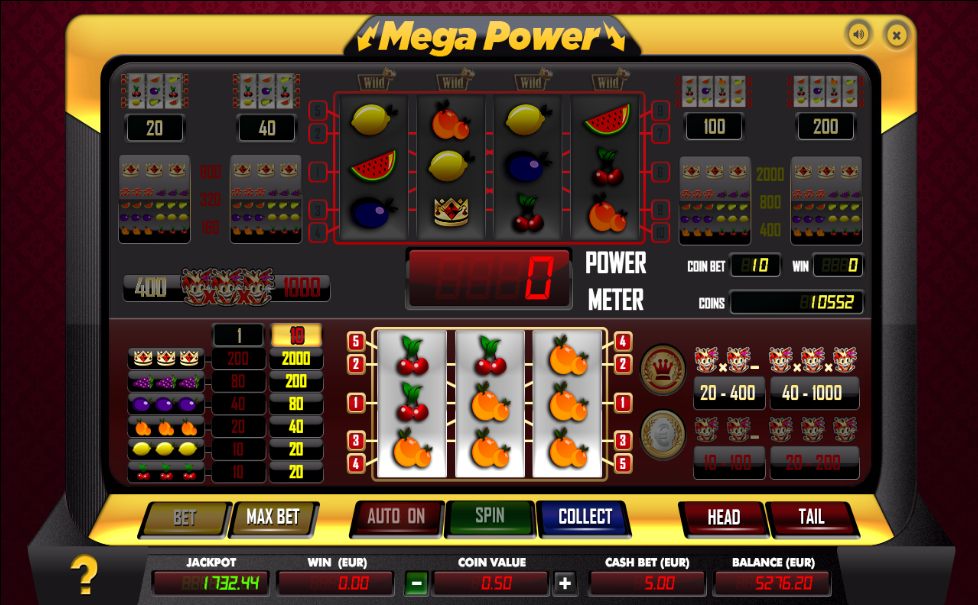 Sometimes we like to play an online slot which could be described as classic and that’s exactly what we have for you here – the name of this game is Mega Power, it’s developed by Altea Gaming and it uses a double reel layout which we’ve seen before, but not too often. Read all about it below.

Mega Power is a three reel slot with three rows and up to five paylines; there’s a traditional look to this machine which should be familiar to those who spent their youth playing fruit machines in cafes and pubs around the UK. The main reel is at the bottom surrounded by the standard paytables while the Mega Power reel is at the top, but more of that shortly.

The symbols are largely traditional and include cherries, lemons, oranges, plums, grapes and crowns. There’s also a joker symbol which will pay a mystery amount for at least two on reels one and two.

When the money runs out in the top reels (or you collect 4000 coins) you will be returned to the base game.

Mega Power is connected to Altea’s progressive jackpot network but you’ll need to be betting at the maximum coin level to be eligible to win it.

Mega Power offers more action than would appear at first sight and it’s a lot of fun, especially when you set the Autoplay, sit back and watch the action.