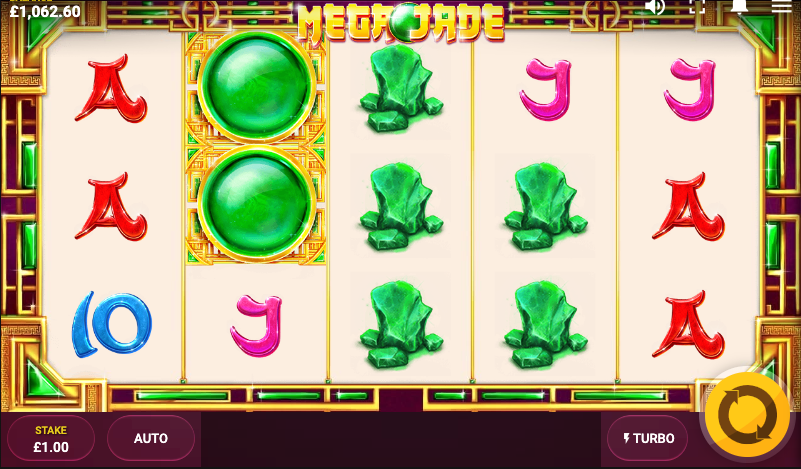 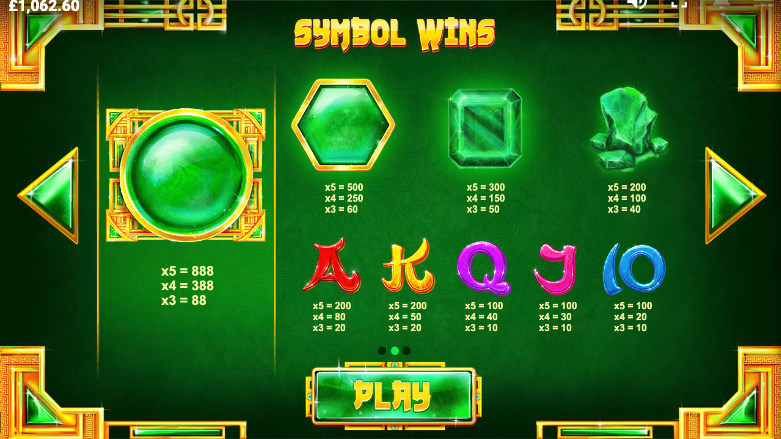 Jade is a gemstone which has been an important part of Chinese culture for hundreds of years and so it makes perfect sense that there are a number of online slot machines themed on this substance; Mega Jade is another to add to the list, it’s developed by Red Tiger Gaming and there are some very big wins to be claimed behind the simple gameplay.

Mega Jade is a five reel slot with three rows and ten fixed paylines; there’s an elaborate golden border around those reels and an authentic Chinese soundtrack to accompany your gameplay.

The three high value symbols are all variations of this gem, one square, one circle, one hexagon and one lump of unshaped jade; 10, J, Q, K and A represent the lower values. The payline structure is a little unusual because winning combos don’t have to start from the left hand side, they can start on reels one, two or three and you have a winner as long as there are three matching symbols.

There’s no wild symbol in Mega Jade but there is the giant, 3×3 jade symbol around which this slot revolves. This is a guaranteed winner each time it lands because paylines don’t have to start on reel one and if you can match it up with smaller jade circles there’s a potential payout of 888x your line stake – not too shabby.

Mega Jade is a game which will suit those who prefer their slots without the complex bells, whistles and bonus features of most new releases; the giant gem adds a bit of variation to a game we would certainly recommend.