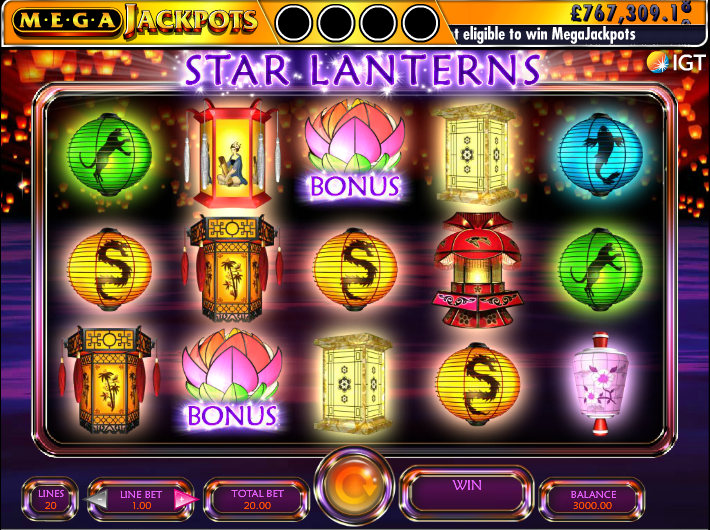 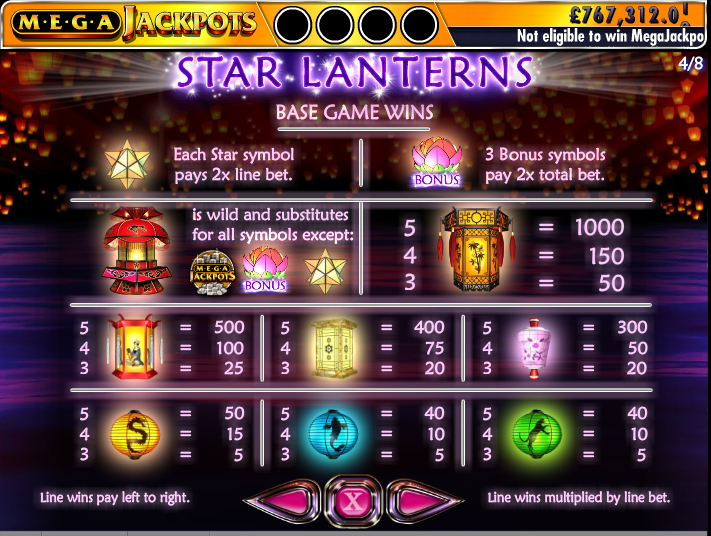 There’s an oriental theme to this online slot machine from IGT and there’s also plenty going on in terms of bonus features and a progressive jackpot; it’s called Mega Jackpots Star Lanterns, it’s includes some innovative gameplay and you can read all about it here.

Mega Jackpots Star Lanterns is a five reel slot with three rows and twenty fixed paylines; those reels are transparent and through them there are gently lapping waves under a night sky filled with floating lanterns. Press ‘Spin’ and you will see the symbols float upwards rather than downwards, mimicking the action of those lanterns.

All the standard symbols are lanterns of varying shapes and sizes although the spherical ones are the lower values while the larger ones are worth bigger prizes.

The wild symbol is a large ornate, red lantern which will substitute for all others in a winning combo except for the flower bonus and the star lantern.

This occurs on each winning spin and you will see those symbols involved disappear to be replaced by more floating up from below; more combos can be formed this way and the process continues until there are no more wins.

The star symbol appears only on reels one, two and three and each that lands awards a multiplier of 2x, 3x or 5x for any wins on that particular spin (or set of spins if the Floating Reels is triggered); each star will also disappear in the same way as a winning combo does. If two or more stars land on the same spin, the multiplier values are added together.

The progressive jackpot  is also win here – each star may reveal a Mega Jackpots symbol which will be added to the empty spaces above the reels; collect all four on the same spin and the jackpot is yours.

This is triggered by landing three of the flower bonus symbols anywhere on reels one, two and three; now pick one of the three lanterns displayed to reveal between 4 and 14 free spins. It’s not possible to trigger and more spins from within the feature because there are no bonus symbols on the reels.

Mega Jackpots Star Lanterns is a great-looking slot and a captivating one to play also; the Floating Reels feature makes you want to keep spinning the reels and there’s a huge progressive jackpot to keep things interesting. The only downside is a slightly low RTP which ranges from 90.99% to 93.00%.