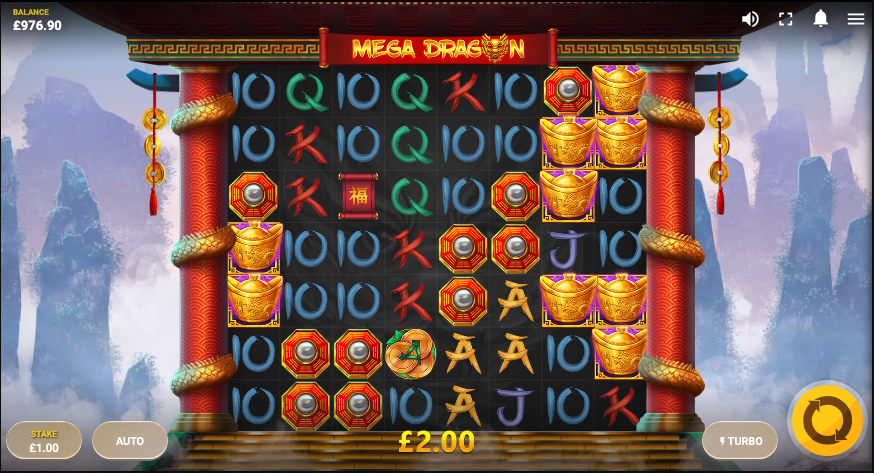 With the exception of various events in The Hobbit and Game of Thrones, dragons are surely always a positive addition to any story and of course any online slot machine; this one’s called Mega Dragon, it’s developed by Red Tiger Gaming and it’s arcade-style gameplay offers some exciting bonus features.

Mega Dragon plays out on an 8×7 grid which spins between two columns accessorised with coiled dragon tails and strings if gold coins; in the background thin stacks of rocks emerge from the mist to complete the Chinese scene.

The theme-related symbols include a gold ingot, some gold coins, something which could be a shield and a red scroll; 10, J, Q, K and A make up the lower values.

The dragon is wild and he will substitute for all other symbols to help form winning combinations – we’ll explain below how he’s formed and what he does.

Winning combinations are formed by landing clusters of at least five matching symbols horizontally or vertically, these will disappear to be replaced by more falling in from above to continue the process. Wild symbols are created when a cluster of five or more higher value symbols is formed and that wild will remain on the reels until this sequence ends.

When two wild symbols are formed and end up adjacent to each other one of the following dragon features will be triggered:

The extra good news is that multiple dragons can appear in the same sequence, creating more wilds and extending the winning.

Mega Dragon offers something a little different to the standard slot and plenty of fun it is too – wins are a little hard to come by in this high variance game but once the dragons appear things will take a profitable turn for the luckier players.