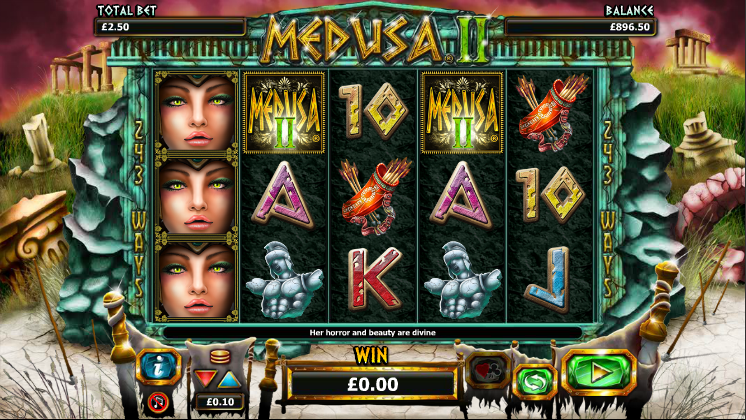 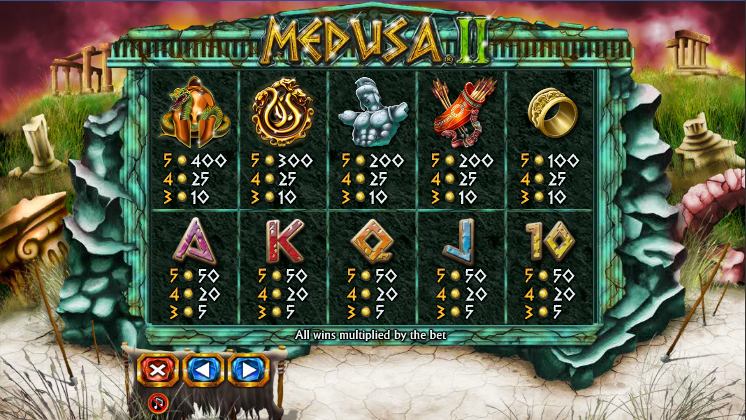 As a regular online slots player you will have made many virtual trips to Ancient Greece to play games which feature many Greek gods and their associated legends. Medusa II adds another game to that list and of course it’s a sequel to Nextgen Gaming’s original Medusa slot. Medusa was one of the Gorgons who, if you looked directly at her, could turn you to stone.

Medusa II plays out over five reels and 243 paylines which means you can create winning combos as long as you have matching symbols in adjacent reels beginning from the left hand side. There’s no payline structure.

The five main symbols are a gold ring, a quiver of arrows, a turned-to-stone victim, a golden snakes artefact and a bronze helmet. 10, J, Q, K and A make up the lower value symbols.

The game’s Medusa II logo is the scatter which activates the main feature and Medusa herself is wild.

During the base game and the free spins, two, three, four or five of the reels can lock together and when they stop they will all be displaying the same symbols. This can produce some big wins if you’re lucky.

Check out the video above to see the free spins in action.

During the base game a soldier may randomly appear to attack Medusa; she will turn him to stone and the reel he is on will become completely wild.

Each win can be gambled by clicking the ‘hearts/clubs’ button underneath the reels. You can double or quadruple your winnings by correctly predicting whether the next playing card revealed is the right colour or suit. You can successfully gamble five times in a row.

Watch that gamble feature! Trying to beat it too many times is the quick way to shrink your bankroll.

Nextgen make some engaging and detailed slots and this is enjoyable stuff, even if graphically it’s not much of an improvement on the original. Medusa is still alive, kicking and turning people to stone.