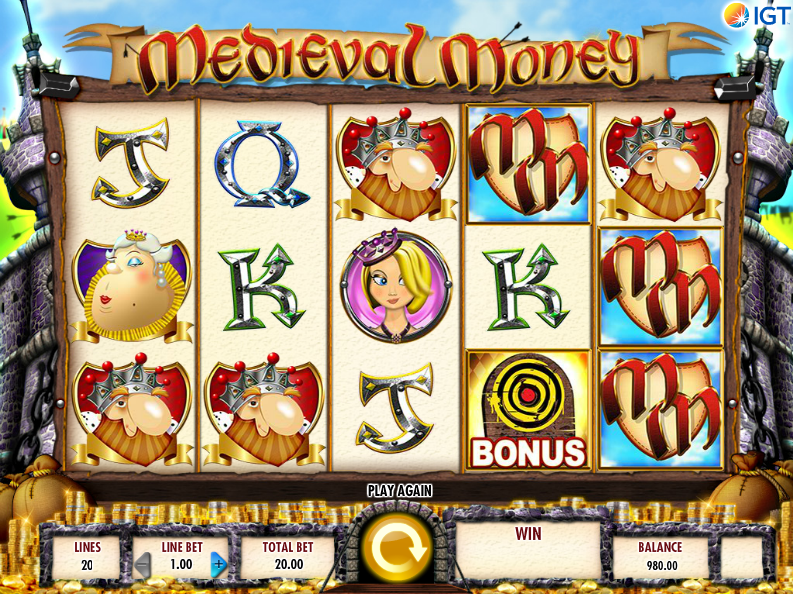 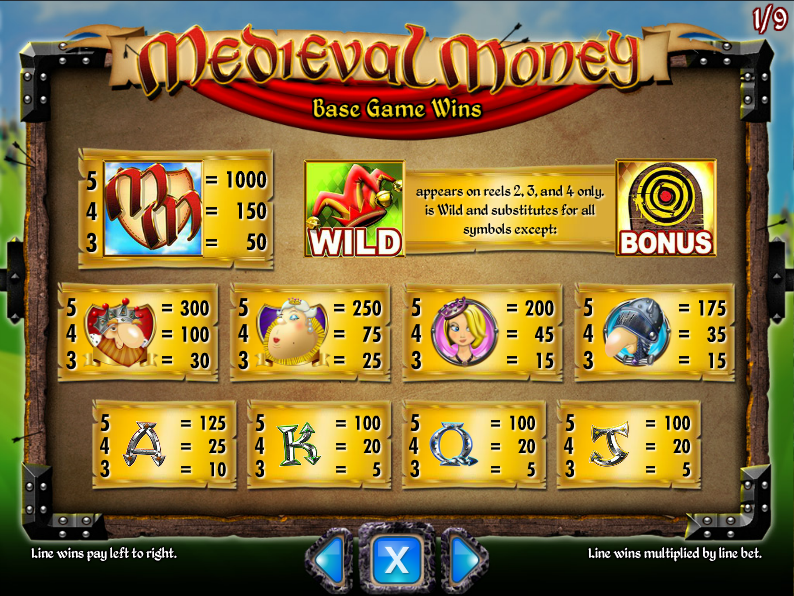 Many online slots use a trip back in history to influence a particular theme and the Middle Ages is as good a time as any in which set the story. This particular one’s called Medieval Money, it’s developed by IGT and it comes with four potential bonus features to brighten up your day.

Medieval Money is a five reel slot with three rows and twenty fixed paylines; those reels spin on a large piece of canvas underneath which is are stacks of gold coins. Just about visible in the background are the edges of a large castle below a blue sky.

There are four high value symbols including the game’s logo, the King, the Queen, the Princess and a big-nosed Knight; J, Q, K and A make up the lower values.

The jester’s hat is wild and will replace all others in a winning combo except the target scatter icon.

This is triggered by landing three of the target scatter symbols anywhere on reels two, three and four; you will now be shown nine targets so just pick one to determine which of the four features you get to play:

Money Bags Picker – select one of the three bags shown to reveal a win multiplier of up to 50x.

Joust Free Spins – you win seven free spins which includes ‘jousting wilds’, triggered when red and blue knights land on reels one and five respectively; they have a quick joust to determine the winner and all his colour symbols will become wild.

Spell Picker – select one of the wizard’s five spell bottles to receive a win multiplier of up to 100x; you can reject this for another bottle up to five times.

Dragon Path Bonus – you must try and work your way to the end of the path and the treasure hoard by spinning the wheel to determine steps moved. If you spin a skull the round is over but you are awarded the multiplier shown on the position you’ve reached.

Medieval Money is a very enjoyable way to spend your reel spinning time with four possible bonus features to check out and some amusing graphics. It comes with an RTP of 92.40%-96.34%.