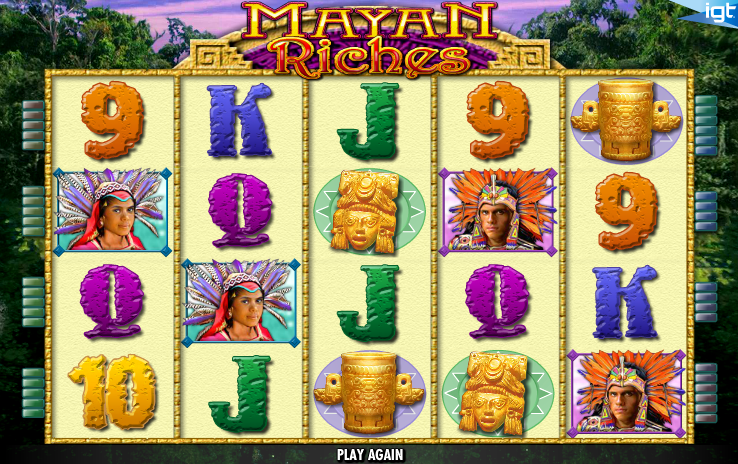 It’s been a while since we’ve visited the jungles of South America and it’s always a pleasure to take a trip to that steamy part of the world. Now that IGT have released Mayan Riches we have yet another opportunity to play an online slot featuring all those symbols so recognisable from other games of this genre.

Mayan Riches plays out over five reels and forty paylines and although it’s a new slot it does have many of the traits familiar to other Mayan-themed games. The reels are set against that huge and famous Mayan calendar wheel and behind that we have some thick jungle foliage.

The symbols too are largely familiar and aside from the standard 9, 10, J, Q, K and A there are a couple of ornate Mayan relics, a couple of natives in traditional headgear and a pyramid.

That pyramid also represents the wild symbol and then there’s a gold ‘Bonus’ which is the key to the main feature.

In this game the pyramid can appear stacked on the reels which means that it can cover al the positions there – this obviously provides many more winning opportunities for the luckier players.

Mayan Riches has just the one feature and it’s a free spins round. It can be triggered by landing three of the bonus symbols on the centre three reels during the base game.

You will now receive a mere five spins and there are no multipliers associated with them but there will be more stacked wilds added to this special set of reels.

It’s also possible to re-trigger the spins by landing more bonus symbols during this phase up to a maximum of 255.

The bonus symbols don’t have to be on a specified payline to trigger the feature so you can play with just one line if you like and still have the same chance of getting the free spins.

This is a nice enough slot and it’s good looking but it doesn’t really add much to the genre. There’s also a bit of a lack of creativity here when it comes to bonus features but if you like this theme then go for it.