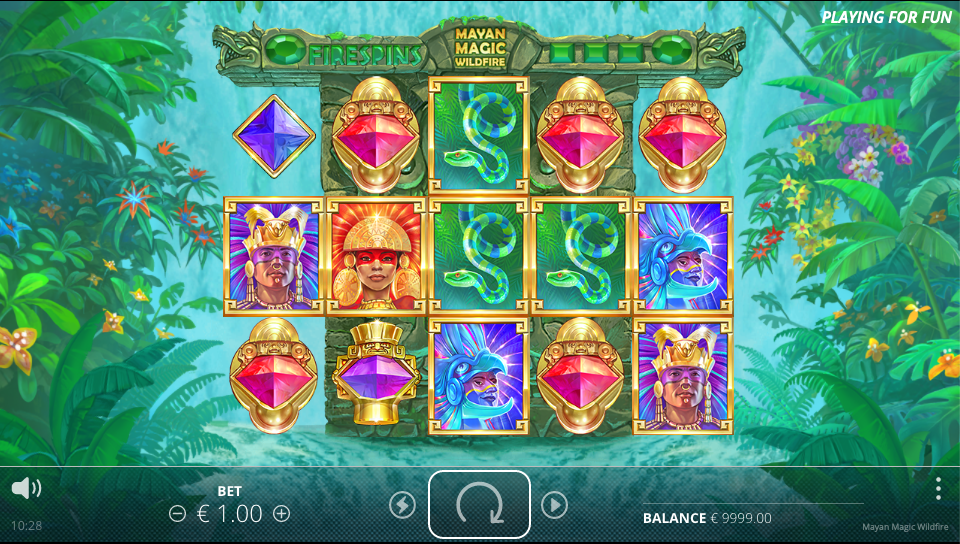 The long-gone Mayan civilisation provides us with the theme of this colourful online slot from Nolimit City; it’s called Mayan Magic Wildfire and it offers players several clever wild features along with paylines which pay both ways.

Mayan Magic Wildfire is a five reel slot with three rows and ten fixed paylines which pay in both directions so that number is effectively doubled. The reels spin in front of a cascading waterfall flanked on either side by dense jungle and your gameplay is accompanied by delicate tribal sounds.

Two members of the royal household, the priest, the jaguar and the snake represent the high value symbols while gold plated jewels in red, purple, blue and green make up the lower values.

The big, gold ‘Wild’ is wild and it will substitute for all other symbols to help form winning combinations – there are no other special symbols in this game.

This is triggered by landing a wild symbol anywhere on reels two, three and four; the centre position on reel three will now become a sticky wild and you’ll receive one respin with any further wilds triggering another spin. Every third wild landing will increase the win multiplier by 1x.

This is a randomly triggered feature and the symbol on the centre position of reel three will turn wild along with any other instances of that symbol on reels two, three and four.

This can also be triggered on any spin and reels two, three and four will synchronise so that each row displays matching symbols, making it more likely that big wins will hit, especially as the paylines pay in both directions.

Mayan Magic Wildfire is another high quality slot from Nolimit City and it just shows that there are other bonus features rather than free spins to entertain and, if we’re lucky make us a bit of cash. This is very enjoyable and highly recommended.