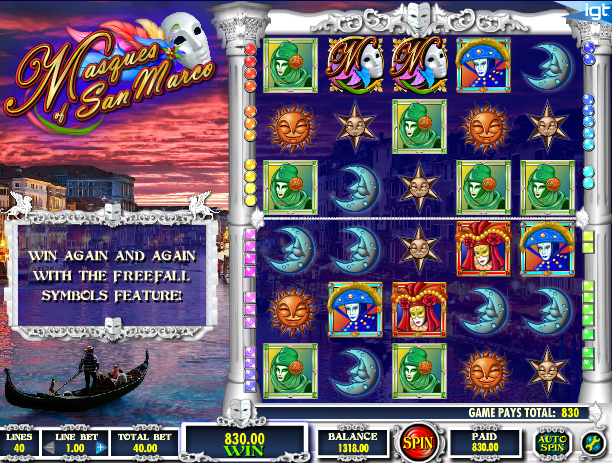 Well here’s something a little different – Masques of San Marco is a brand new online slot machine from IGT with an interesting payline structure and a collapsing reels feature which we always enjoy.  It’s the second Venice-themed game we’ve reviewed recently, the other being WMS Gaming’s Hearts of Venice and they’re both a cut above your average slot.

Masques of San Marco is described by IGT as dualPlay and it’s the first time we’ve seen this particular feature.  On the screenshot above you can see that the game is played out inside a 6 x 6 square; the top and bottom halves are separate so there are twenty paylines in either half – forty in total.

The theme of the game is the mask festival which takes place annually in St. Marks Square (San Marco) and the symbols all reflect that subject matter.  Four elaborately-masked characters sit alongside a sun, a moon and a star; there’s a wild symbol and there’s also a bonus symbols which activates the free spins.

This is always a popular feature with us and it gives the impression of getting free spins for not much effort.  Essentially each time you spin a win, the symbols involved in that win will disappear, making way for more to fall into their place.  Those new symbols can also contribute to new combos so theoretically it can go on for ever.

Land three of the bonus symbols in the top or bottom half of the reels and you’ll kick off six free spins, as you can see from the video below.  During the spins another twenty paylines are added as the centre dividing line is removed and of course the reels keep collapsing as long as you keep winning so it seems like a lot more than six spins.

Nothing to add here unfortunately – you can’t change anything except the bet level so just play the game and have fun.

Despite the lack of interactivity, this is an excellent slot with some nice sound effects; just set Autoplay to whatever you want, sit back and enjoy the action.  Two bonus features and an innovative look mean this is a slot which should be tried by all.