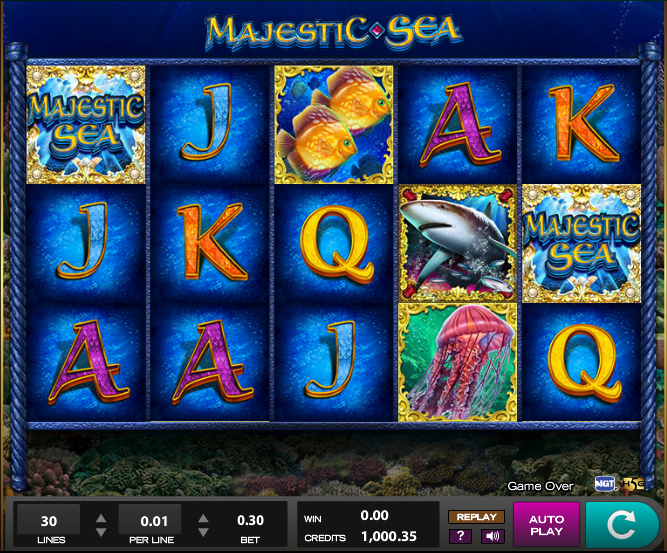 The world beneath the waves awaits us once more as we hold our breath just long enough to check out this ocean-themed online slot from IGT/High 5; it’s called Majestic Sea and in that environment live numerous and varied sea creatures, all trying to help you win payouts. Learn more by checking out the review below.

Majestic Sea is a five reel slot with three rows and up to thirty paylines; the soundtrack doesn’t particularly fit with the theme but there are some good old traditional slots sounds to contend with, especially when you land a win. The seabed is just visible at the bottom of the screen while the dark sea closes in from above the reels.

There are five theme-relates symbols and these are a shark, a turtle, a flatfish, a jellyfish and a goldfish; lower values are represented by J, Q, K and A.

The Majestic Sea logo is wild and will replace all others to form a winning combo; when substituting for the five higher value icons it’s worth double. The pearls are the scatter symbol which is the key to the main feature.

This is triggered by landing the pearl/split pearl scatter symbol anywhere on reels two, three and four for which you will receive the following:

There’s no option to retrigger the spins so once they’re finished you’ll be returned to the base game.

Some icons contain two of that particular symbol which means it’s possible to land a payline of up to ten symbols.

Majestic Sea is a rather run-of-the-mill slot which doesn’t add much to an already crowded genre; give it a go if you’re a fan of the ocean theme though – it comes with an RTP of 94.90%.