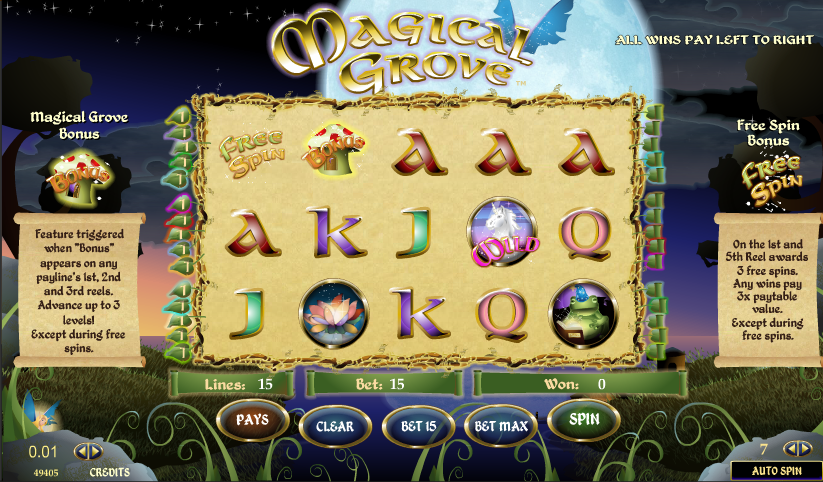 Everyone appreciates the occasional opportunity to visit a fantasy world and there are plenty of online slots with mystical themes to underline that point. Magical Grove is another attempt to visit one of those fantastic realms and it was originally developed by Chartwell Gaming, a company which was subsequently acquired by Amaya Gaming.

Magical Grove is a five reel and fifteen payline slot and when you load the game up you can see a real effort has been made to develop a mystical atmosphere. A huge full moon overlooks an idealistic landscape and the wings of a fairy are silhouetted against that lunar shape.

The symbols are set within a small frame in the centre of the screen and frankly, we’d prefer them to be a little bigger but you can see everything quite clearly. Aside from the usual J, Q, K and A we have some theme-related icons including a flower, an elf, a frog and a fairy.

Bonus symbols include a Free Spins icon, a unicorn wild, a toadstool bonus and a sparkling fairy scatter.

The Free Spins symbols appears only on reels one and five and if you can manage to land them there on the same spin you will win three spins. Any prizes you win will be tripled but these espies can’t be re-triggered.

To trigger this feature you will need to land the toadstool bonus symbol on reels one two and three on an active payline. You will then get to play a mini-game in which it’s possible to advance through three levels for increasingly high rewards.

If you want to win the main feature, make sure you are playing with all fifteen paylines active because it’s only triggered by those bonus symbols on an active payline.

This is a pleasant enough diversion although we can’t ignore the fact that everything is a bit small on the screen. Get over that and you’ll find a game which looks nice and includes several bonus features.