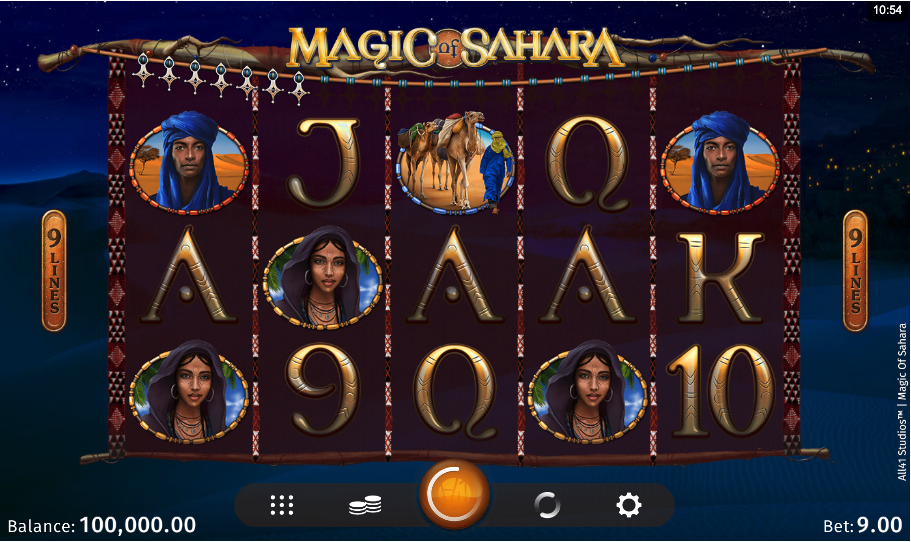 The land where the city meets the desert is the setting for this sandy online slot from Microgaming; it’s called Magic of Sahara and it follows the fortunes of nomadic travellers as they make their way across this vast area, collecting Magic Tokens and dispensing free spins along the way.

Magic of Sahara is a five reel slot with three rows and nine fixed paylines; those reels spin on a delicate tapestry floating above the hot sand during the day and the cooler temperatures as the sun goes down.

The three high value symbols are the male and female members of this caravan plus a few camels; 9, 10, J, Q, K and A represent the lower values.

The Magic of Sahara logo is wild, it appears on all reels, it’s stacked on reels three and four and it will replace all others standard symbols to help form winning combinations. The scatter symbol is the bowl of gold and jewels.

There are two ways to trigger the free spins in Magic of Sahara – the first is to land at least three scatter symbols anywhere in view and the second is to collect twenty five of the Magic Tokens which are then displayed above the reels; each of the old man symbols will award one token and he’ll then transform into one of the lower value symbols.

Triggering the spins with the scatter symbols will award the number of tokens already collected plus an extra five but completing the chain of tokens will award twenty five free spins. The wild symbol is stacked on all reels and all wins during the free spins are subject to a 2x multiplier. It’s not possible to trigger this round again during the feature.

Magic of Sahara is a relaxing and atmospheric slots experience which may not be ground-breaking in terms of features or graphics but it’s a nice addition to the Arabian-themed games already out there – the bigger wins come courtesy of the free spins round.