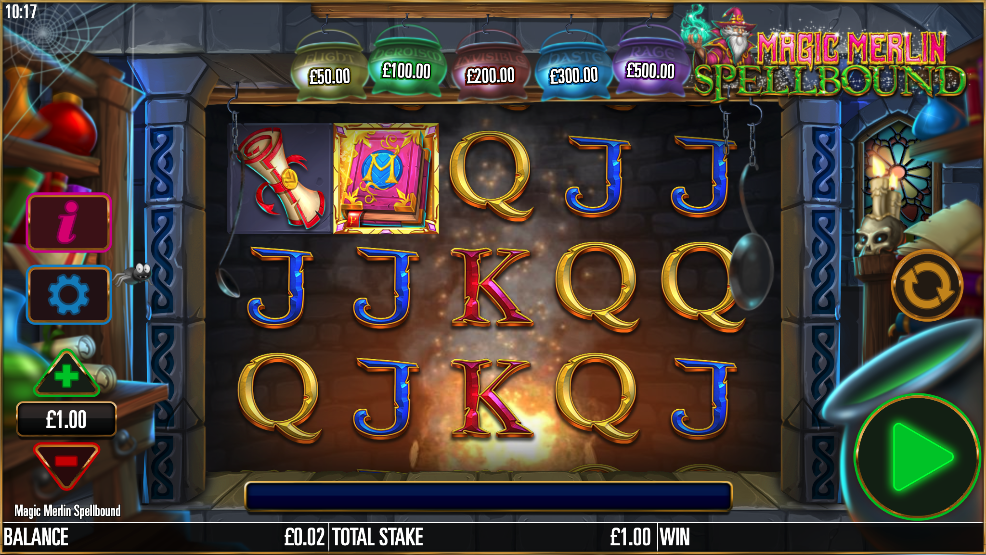 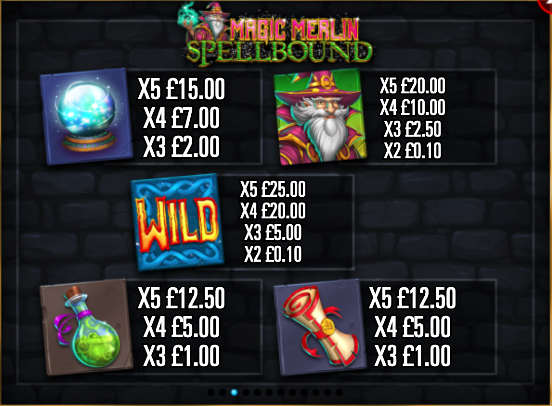 The legend of King Arthur has provided the world of online slots with plenty of material over the years and Merlin has appeared in a fair number of those; here he returns in Magic Merlin Spellbound, an outing which will reward players with free spins and jackpot prizes.

Magic Merlin Spellbound is a five reel slot with three rows and twenty fixed paylines; Merlin’s lab is the setting for the action with candles, potions and cheery spiders accessorising the scene.

The four high value symbols include Merlin, the crystal ball, the green potion and the tied scroll; 10, J, Q, K and A make up the lower values.

The big ‘Wild’ is the wild symbol and it will substitute for all others to help form winning combos except for the Mystery Cards and the Spellbook scatter symbols.

After any spin these cards may appear and transform into winning symbols.

Merlin can appear at random during the base game and award the following:

Landing three of the spellbooks anywhere on reels one, three and five will kick off the free spins round with one of the following ‘upgrades’:

Any wild symbols which land during normal gameplay are added to the cauldron on the right hand side; the feature is then triggered randomly and you’ll get to play a picking round in which you try to move across the reels by finding green arrows. The final point you reach will win the prize shown above that reel and these start at 50x the stake on reel one and raise to 500x on reel five.

Merlin usually delivers the goods and Magic Merlin Spellbound is no exception; it’s a slot full of fantasy charm and bonus features and we particularly like the Pot bonus.