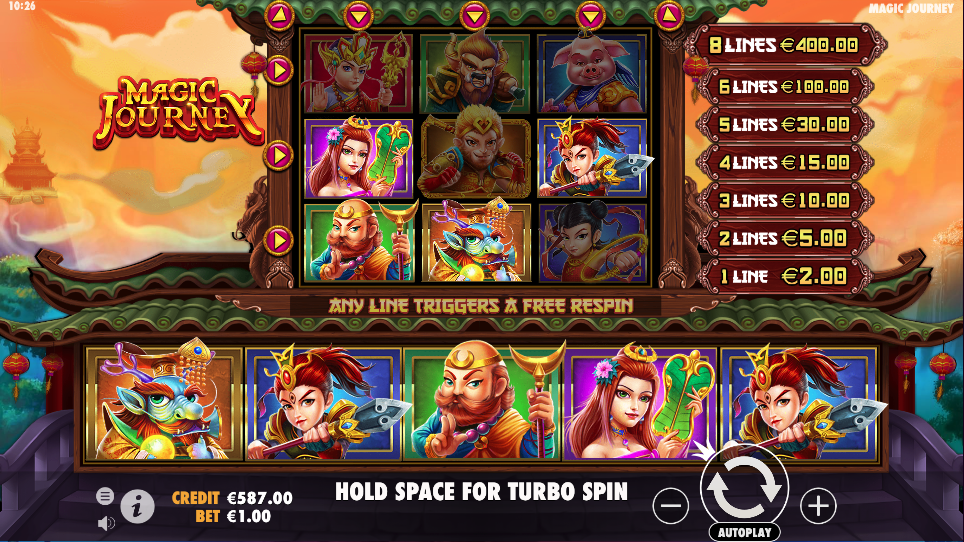 A fantasy trip back in time to China awaits those willing to try out this online slot from Pragmatic Play – it’s called Magic Journey and the symbols used during its unusual gameplay bring to mind the 1970s TV series Monkey and the legendary feats of those characters involved.

A traditional temple is the setting for the action complete with Chinese paper lanterns swaying in the breeze; the background is an enticing view across hills and valleys disappearing into the hazy, orange cloud.

Magic Journey is a five reel slot with just one row and the gameplay here needs a little bit of explanation; think of the area above the reels as a bingo card and each symbol landing on those reels will light up on that card with the aim of completing lines horizontally, vertically or diagonally across it.

Aside from the wild Monkey character there are eight symbols and they are all well-drawn characters from this story, mostly wielding weapons.

There are two ways to trigger a free spins in this game:

Either way the reels will spin again and hopefully another line will be created, continuing the process and increasing your wins. If another Monkey lands it will also award a respin.

When there are no new completed lines or Monkeys the round is over, the bingo card is cleared and the base game starts again.

There’s something quite compelling about Magic Journey even if has only got one row; it looks great and lines are regularly completed to trigger the bonus for bigger wins.