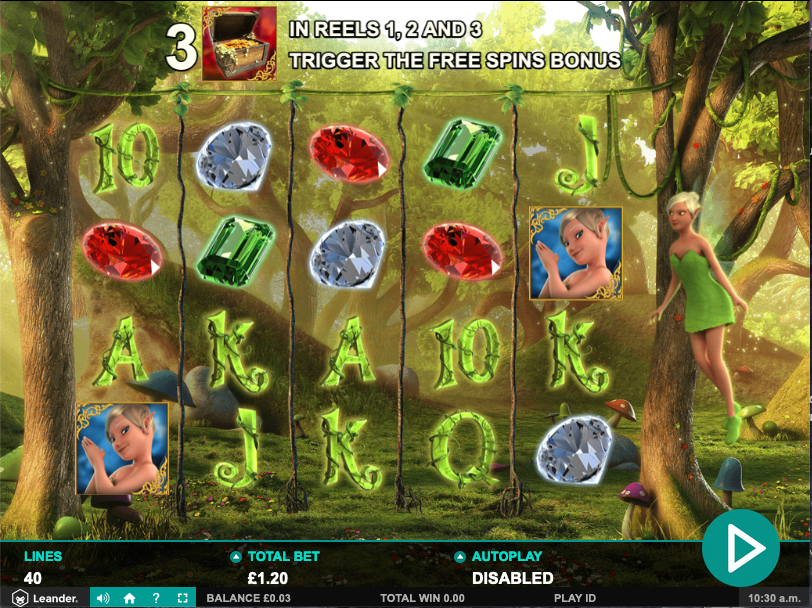 As we all know forests are magical places full of fairies, colourful toadstools and valuable gems just waiting to be discovered; Magic Gems Deluxe is an online slot from Leander Games which takes us into that world, promising free spins and exploding symbols along the way.

Magic Gems Deluxe is a five reel slot with four rows and forty fixed paylines; the symbols spin within vines strung between trees on either side of this woodland clearing while a fairy floats on the right hand side, occasionally blowing some magical dust into the reels.

A diamond, a lump of jade and a ruby represent the higher value symbols while 9, 10, J, Q, K and A make up the lower values.

The fairy is wild and she will substitute for all standard symbols to help make winning matches; the chests of gold are the bonus symbols.

Always a feature we enjoy, Exploding Chains sees any symbols in winning combos disappearing to be replaced by more falling in from above – new combos can then be formed and this process contiues until there are no more wins.

This is triggered by landing three of the treasure chest bonus symbols anywhere on reels one, two and three for which you will receive ten free spins; the Exploding Chains are active during this round and in addition any wild symbols which land will lock in place throughout each of those subsequent explosions.

Fairies, gems, exploding symbols and free spins rarely fail to combine succesfully and Magic Gems Deluxe is no exception – it’s a slot with loads of charm, colourful action and some big wins in the free spins round.