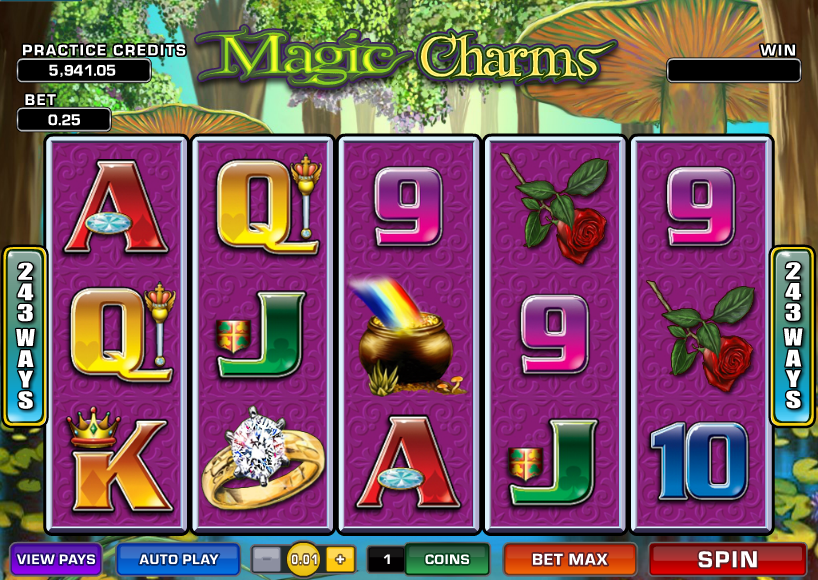 The phrase ‘magic charms’ brings to mind a range of items from various fairytales, legends and other children’s stories.  Microgaming have developed a game here which does indeed take aspects of a number of old tales and brings them to life in this online slot.

Magic Charms is a slot which features five reels and 243 ways to win; it’s all set in some sort of mystical forest where giant mushrooms as tall as trees sprout up from the woodland floor.  The major symbols are a red rose, a pot of gold at the end of a rainbow and a sparkling ring.  The minor symbols are represented by 9, 10, J, Q, K and A.

The frog prince and the princess wild symbols are there for more than just acting as wilds; the prince only appears on reel two and the princess on reel four but if you can land them on the screen at the same time, good things happen.

Both symbols will become stacked wilds on their respective reels and remain in place for a duration of three free spins, helping you to make some winning combos.  The frog turns into the prince when the symbols is stacked.

This wild symbol only appears on reel three but if you’re lucky enough to land it in a winning combo it will be worth a 2x multiplier.

If you like a gamble (and you probably do), there’s an opportunity to double up your most recent win by clicking the ‘Double Up’ button and playing a red/black card prediction game.  You can also try and predict the correct suit for a 4x win.

Loads of bonus features make this a pretty addictive way to spend your time; the free spins round seems to get activated fairly regularly so you never too far away from some variety.