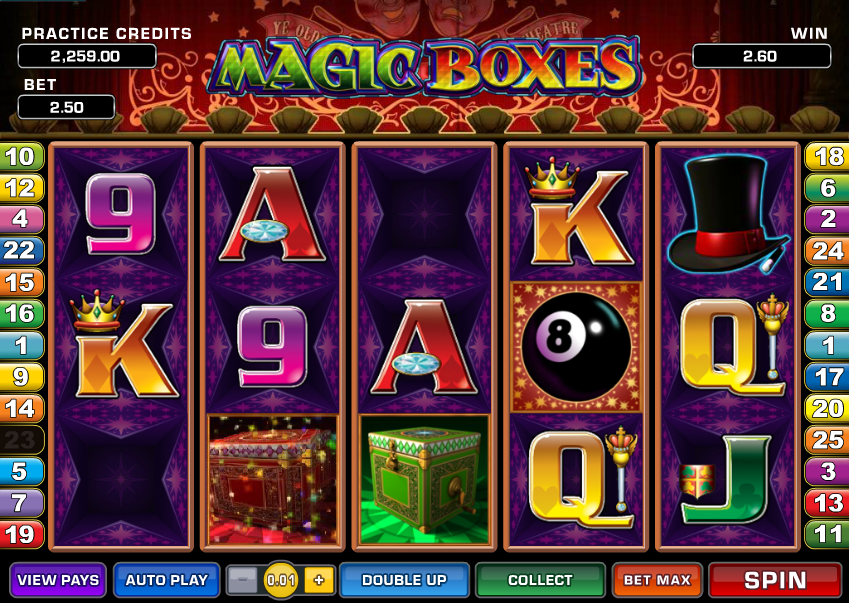 Magic Boxes is an online slot machine from Microgaming which celebrates the mysterious world of the magician but in our opinion the atmosphere is a bit darker than that.  It seems to be set in a gloomy old theatre with a distinctly Victorian feel but there’s nothing wrong with that – who wants to see a cheerful magician on a sunny day?  Give us a creepy magic show anytime.

Magic Boxes is a five reel and twenty five payline slot which adheres pretty closely to the clean, quality style we expect from Microgaming.  The main symbols are playing cards, a wooden train, a spinning top and a magician’s hat and wand.  Minor symbols are the standard 9, 10, J, Q, K and A.

Special symbols include the eight ball scatter which activates the bonus feature and three magic box wilds which are coloured red, green and blue.

Landing three of the eight ball scatter symbols anywhere on the reels will win you free spins as well as the symbols payout.  Three, four or five eight balls will reward you with eight, sixteen or twenty four spins respectively.

The magic box wilds come in handy here as well; during the base game they act as standard wilds but in this feature they appear just on reels two, three and four and will multiply the wins to which they contribute by up to 4x.

Red Boxes are worth 2x, green are worth 3x and blue 4x but if boxes of different colours occur on the same winning spin (but on different paylines), the lower multiplier will increase to match the higher one.

Enthusiastic gamblers will appreciate the opportunity to stake their most recent win on the chance to double up by picking the correct colour card.  You can also try to predict the next suit to be drawn in return for a 4x return on your stake.

Magic Box does exhibit the look and feel of many of Microgaming’s slots but it’s fun to play nonetheless.  Sound effects are nice when you spin a win and a free spins round is always welcome.