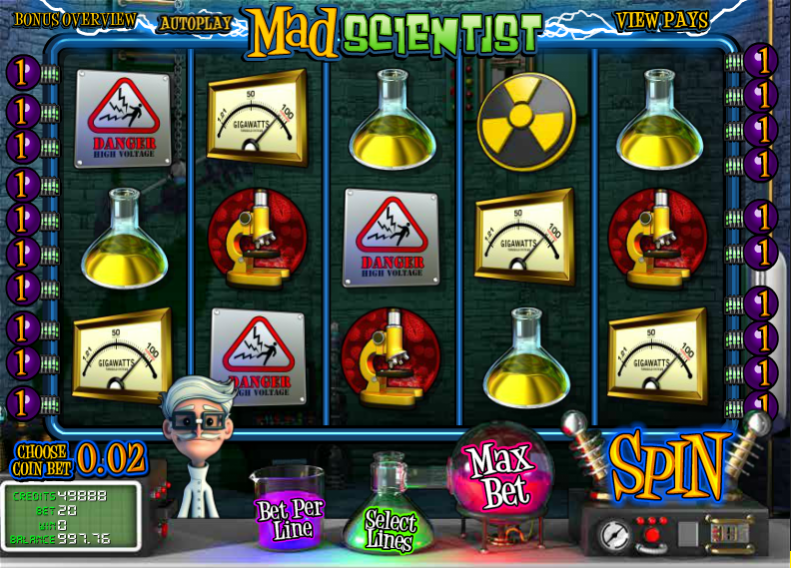 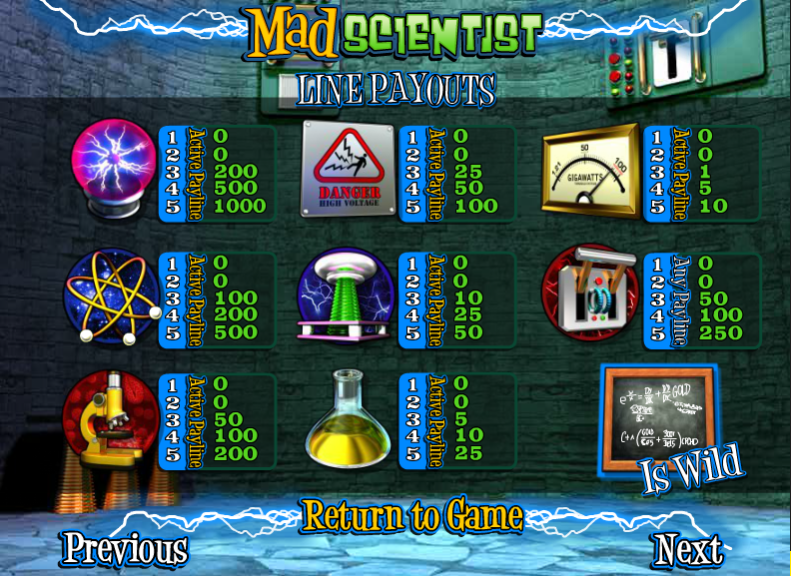 There’s a compelling argument the the world needs crazy academics to push the boundaries of scientific experimentation so we’re quite happy to review this online slot from Betsoft Gaming. It’s called Mad Scientist and it’s based around this chap’s quest to turn things into gold – or alchemy as it’s better known. Anyway it’s all explained below.

Mad Scientist is a five reel slot with three rows and up to twenty paylines; of course it’s all set in some stone-built lab and the reels spin on an an electrically-charged bit of equipment.

There’s an musing bunch of theme-related symbols including a lightning sphere, a danger sign, a watt meter, a chemical symbol, a Tesla coil, a big switch, a microscope and a beaker of yellow liquid.

The blackboard symbol is wild and will replace all others except the various bonus icons – the test tubes, the big switch, the radiation symbol and the Tesla coil.

This is triggered by landing three or more of the test tube scatter symbols anywhere in view and this is your chance to try your hand at some alchemy. You will now be taken to a screen in which the scientist is pouring a green substance on various objects. Pick the object and you will win cash prizes depending on whether it turns to gold, silver or bronze. Triggering this round with more than three test tube symbols will add a multiplier to any wins.

Trigger this by landing the Tesla coil on reels one and five and on paylines one, two or three; random symbols between these generators will now be zapped wild and any wins reevaluated.

This is triggered by landing three or more of the radiation symbols in sequence on an active payline; just pick one of those symbols for a cash prize based on your line stake.

Mad Scientist is a typically high quality release from Betsoft Gaming which includes a satisfying number of extra features and amusing graphics. Check it out!