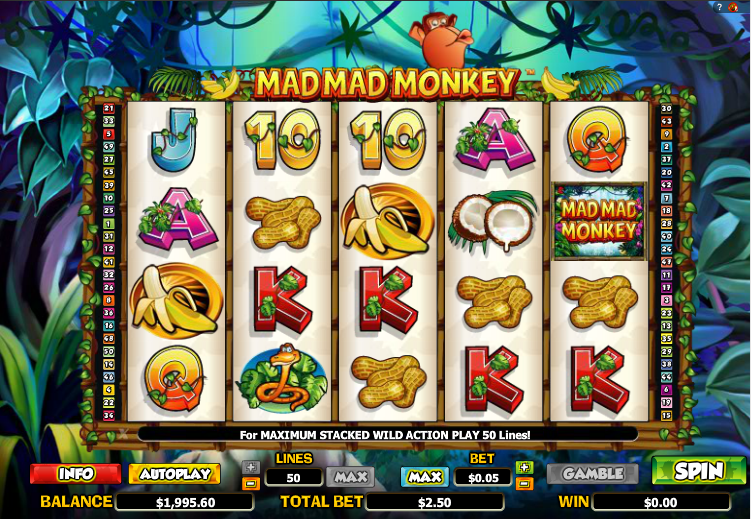 The monkey in this Microgaming online slot is not just mad, he’s twice as mad as that – in fact he’s a Mad Mad Monkey and he inhabits a jungle environment which also contains colourful birds, animals and other Amazonian paraphernalia.

With Mad Mad Monkey Microgaming have developed a five reel and fifty payline slot that’s a nice addition to all the other monkey-related slots out there.  As we stated above the reels are set against a jungle background of blues and greens and periodically the crazy monkey will emerge from behind the symbols and sometimes hang down from above.

The main symbols are a split coconut, a smiling snake, a parrot and a banana while the minor symbols are 10, J, Q, K and A.  There’s a Mad Mad Monkey scatter symbol which activates the free spins and a grinning monkey wild.

The monkey wild is worth a mention here and as well as tripling any prizes it helps create, it is stacked on reels two, three and four.  This means that wilds can appear directly on top of one another which gives the player opportunities for more combos.

Three of the Mad Mad Monkey scatter symbols landing anywhere on the reels will grant you entry into the free spins round; you’ll win ten of the aforementioned spins and all prizes gained in this round will be subject to a 3x multiplier.

The banana wild symbol appears stacked on all reels which means lots more prize winning fun for all concerned.

Anyone who’d like to gamble their most recent win can do so by clicking the ‘Gamble’ button underneath the reels; you will be trying to predict whether the next card drawn is red or black to double your winnings or pick the correct suit to quadruple them.

If you’re after a monkey-related slot recommendation than look no further than Mad Mad Monkey; it’s good fun but without too many ground breaking features.  The soundtrack adds to the chaos with it’s monkey noises.