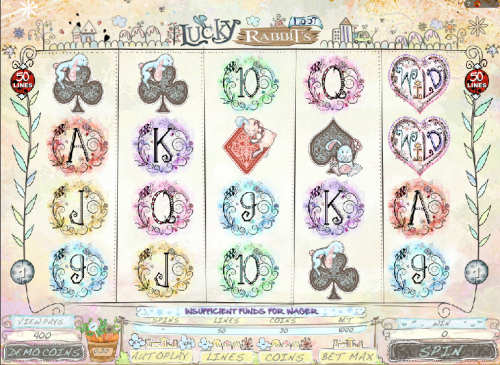 Lucky Rabbit’s Loot is a graphically impressive online slot from Microgaming and from the moment you load the game up you’re aware it’s going to be a bit different.  We don’t want to suggest that some slots will attract a certain demographic but this is without doubt one for the ladies with pastel colours, pencil drawn graphics and cute animations.

Lucky Rabbit’s Foot looks absolutely gorgeous; it’s a five reel and fifty payline slot which features four rows of reels rather than the usual three.  When you start playing tale the opportunity to check out the tiny cars, the hearts and the clouds which float around above the reels.

Most of the symbols are playing card-related and so from low to high value we have 9, 10, J, Q, K and A followed by a club, a diamond, a heart and a spade, those latter four adorned with cute pastel-coloured rabbits. Special symbols include a heart wild and a Lucky Rabbit’s Loot scatter.

This is the main bonus feature and to get hold of those free spins you’ll need to land three of the Lucky Rabbit’s Loot scatter symbols anywhere on the reels.  You will now be rewarded with eight free spins so just press ‘Spin’ to being the feature.

The feature of the free spins that appears to be most profitable is the stacked wilds; if any part of the stacked symbol appears on a reel it will extend to cover all four vertical symbols.  Because there are four rows of reels the stacked wild will spell out the word ‘Wild’ with each letter in written in heart.

Whether your female or male this is a slot that should be checked out at least once; the animations and graphics are fantastic and almost give the impression of being drawn and created as you’re playing the game.