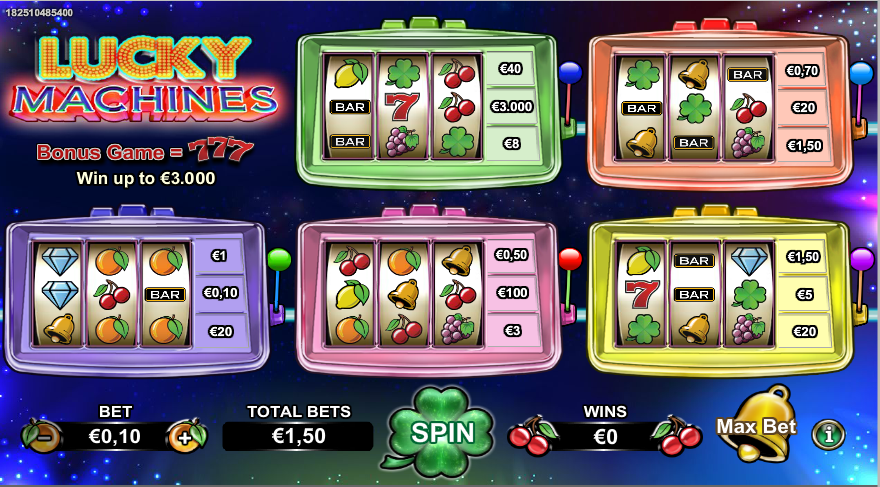 As the old saying goes, ‘a change is as good as a rest’ and we’re always pleased to see an online slot machine which mixes things up a little bit; in this case it comes in the form of Lucky Machines, a game developed by NeoGames with an unusual layout which we shall describe in more detail below.

As you can see from the screenshot above, Lucky Machines is made up of five separate three reel machines, each with three horizontal paylines and it’s nice to see that the pastel-coloured units all operated by a lever on the right hand side reminiscent of a one-armed bandit. It should be noted at this point that you don’t have to use all five slots, just click on one or more to deactivate them.

The symbols are the same on each machine and they are all traditional, including red sevens, clovers, cherries, lemons, bunches of grapes, diamonds, bells, bars, oranges and cherries. These symbols are all worth the same in prize money and a row of three matching will win you the amount which is shown to the right of that particular payline.

This is triggered by landing a winning combination of three red sevens and this is a essentially a free spins round using the same five machines. The reels will spin and the multiplier for your wins will increase by 1x with each spin; however any non-winning paylines will be deactivated and once all lines are out of operation the round is over.

Lucky Machines is a really interesting effort to create something a little different and it works; the multi-machine layout has certainly been done before but add in the payout method and the creative bonus feature and this is a winner – check it out!