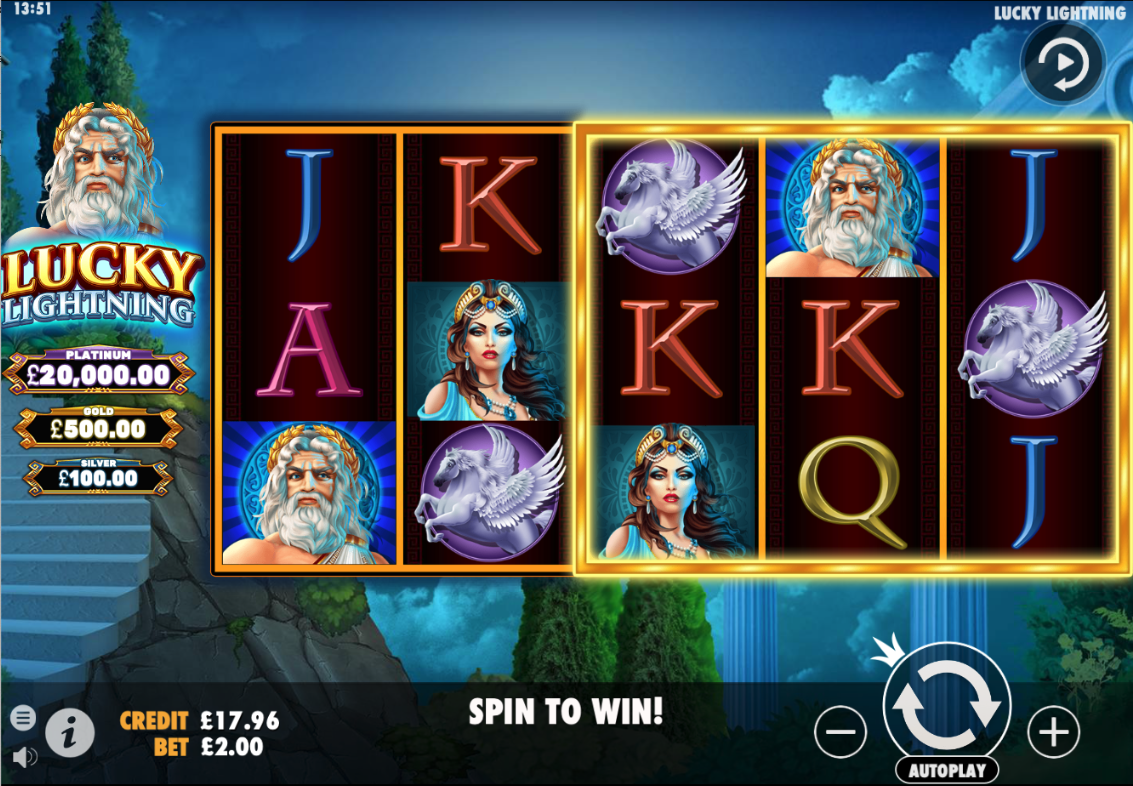 The ancient realms of the Greek gods are the setting for this online slot from Pragmatic Play/Wild Streak Gaming and it comes with the title of Lucky Lightning; players can look forward to the chance of winning free spins, Wild Respins and a playing area which can increase to six reels.

Lucky Lightning is a five reel slot with three rows and 243 ways to win in the base game; the marble halls of Olympus set the scene with the jackpot prizes shown on the left hand side – note the gold frame surrounding reels three, four and five which we’ll explain shortly.

The high value symbols include Zeus, Hera, the Minotaur and the Pegasus; 10, J, Q, K and A make up the lower values. The lightning bolt is wild and the special symbols are the coins and the temple.

Whenever wild symbols land on reels one and two there’s a chance that the reel set will be expanded in one of the following ways:

All coins are now locked in place and reels three, four and five respin – any coins adjacent to the wild symbols on reels one and two will now payout the amounts displayed on them along with any other coins which extend the paylines.

Landing three, four or five of the temple bonus symbols anywhere in view will award 10, 15 or 50 free spins respectively; more spins can be won in the same way once the round is underway and the Wild Respins can also be triggered from here.

Lucky Lightning joins a a very long list of slots themed on the Greek gods but it holds its own with some clever features and the chance of a 10,000x top prize; a relatively high RTP of 96.45% sets this game ahead of some others in the same genre.

Lucky Lightning is a Greek god-themed video slot from Pragmatic Play/Wild Streak Gaming with five reels and 243 ways to win.

The Return To Player percentage for Lucky Lightning is 96.45%.

How To Win On Lucky Lightning?

Where can I play Lucky Lightning?