Car journeys, commuting and traffic jams are a fairly rare theme for online slot machines but who’s to say they can’t be entertaining, especially now we’ve tried out this automobile-themed game from Red7; it’s called Lucky Lanes and it comes with some clever gameplay mechanics and a truckload of free spins.

Lucky Lanes is a three reel slot with three rows and ten fixed paylines; each symbol position is a vehicle of some sort and when the Spin button is pressed the three-lane road will clear, we’ll travel forward and a new set of cars will fill the 3×3 reel set. On the right of the reels the three progressive jackpot values sit there tempting us. 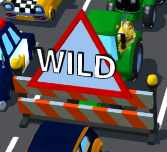 The wild symbol is a barrier dropped by helicopter onto a reel position – it will substitute for all other symbols to help form winning combinations except for the scatter; that’s a truck carrying a Free Games sign.

This is triggered when three Free Games trucks drive anywhere onto the reels in the same spin and you’ll receive an initial award of ten free spins although an unlimited number more can be won by landing three more scatter symbols during this round.

The normal wild doesn’t make an appearance during this round, instead it’s replaced by a wild big enough to occupy all positions on its reel and hopefully help out with some bigger wins. There’s a minimum guaranteed win here of 10x the stake.

The big bucks are won at random but you’ll have a better chance of hitting them the bigger your stakes are.

It’s always refreshing to see something different in a slot and Lucky Lanes brings us some gameplay we’ve certainly not seen before as we move along the road and encounter more cars on our journey, rearranging themselves to form new reel positions. It’s all very clever and once you chuck in some free spins it’s a game not to be missed.