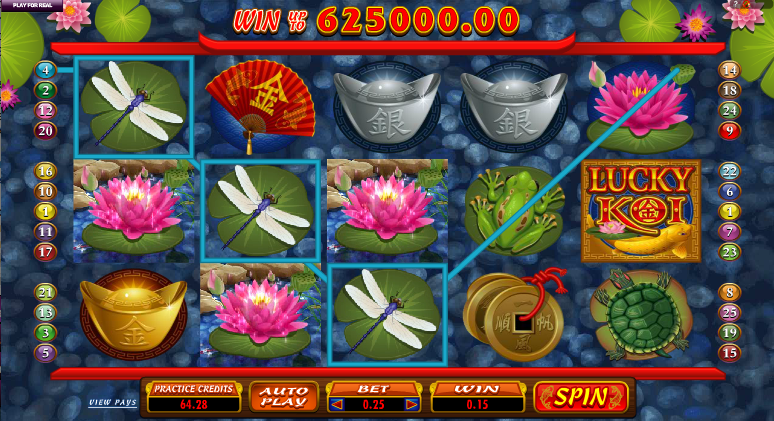 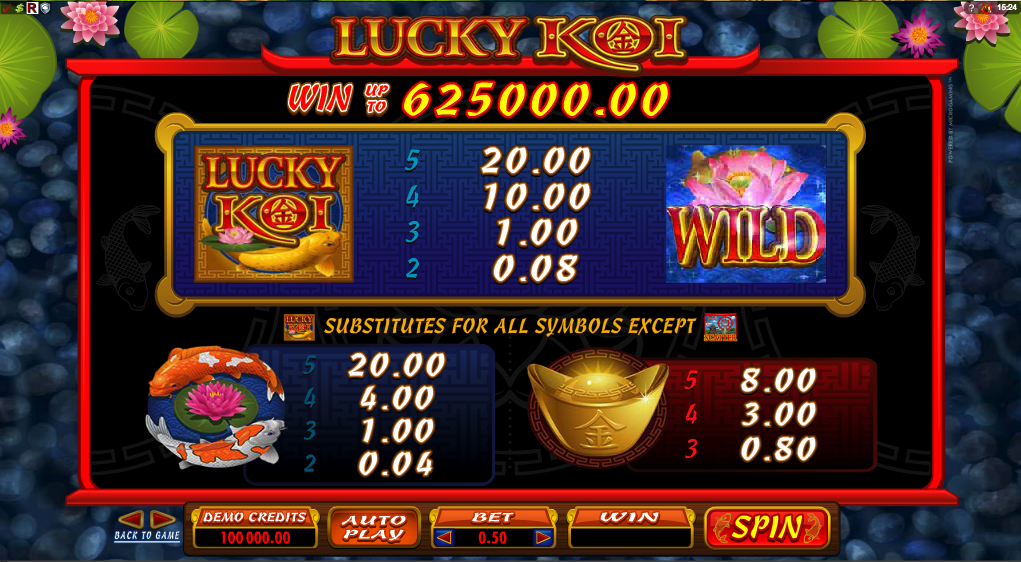 Microgaming’s brand new online slot is here at last and it’s called Lucky Koi. It joins a pretty lengthy list of games with a theme of the far east and at first glance this one looks like the best of the lot – the graphics and animations are fantastic and there’s a relaxing Chinese soundtrack interspersed with dramatic interludes when you land a win.

Lucky Koi has five reels and twenty five paylines and the first thing you notice is that the background is a Koi pond; without even spinning the reels it’s entertaining to watch the different coloured Koi swim around in the well-rendered water. It’s probably the best backdrop to a slot we’ve seen to date.

The symbols may be familiar from similarly-themed slots but they all look great here; they include a dragonfly, a turtle, a frog, a lotus flower, an inscribed fan, Chinese dollar coins, gold and silver ornaments and of course the beautiful Koi.

There’s a Lucky Koi wild symbol and then a scatter which activates the feature.

The scatter symbol is the key to triggering the feature and three or more anywhere on the reels will give you the voice between the following two options:

Free Spins – You will receive anywhere between 10 and 30 free spins with a possible multiplier of up to 5x for any wins you land. The wild becomes an expanded wild for the duration of the spins which should give you more winning chances and it’s also possible to re-trigger the feature by landing three more scatter symbols.

Koi Bonus Game – If you don’t think you’re being offered enough free spins then how about trying this game? You will taken to the Koi pin in which are swimming 12 fish and you will be able to pick between 3 and 6 of them. Each will be worth a bonus amount and when the picks are over, that amount will be totalled up.

The choice here is which bonus to go for when the you trigger the feature; we reckon that 15 spins or more with a 3x multiplier will win you more money, otherwise it may be worth picking the fish, Play for long enough and you can test both bonuses out yourself.

Lucky Koi is probably the best-looking Microgaming slot we’ve played; everything is beautifully animated and the pond underneath the reels is especially impressive. Fortunately the gameplay keeps up with the aesthetics with two separate bonus games.