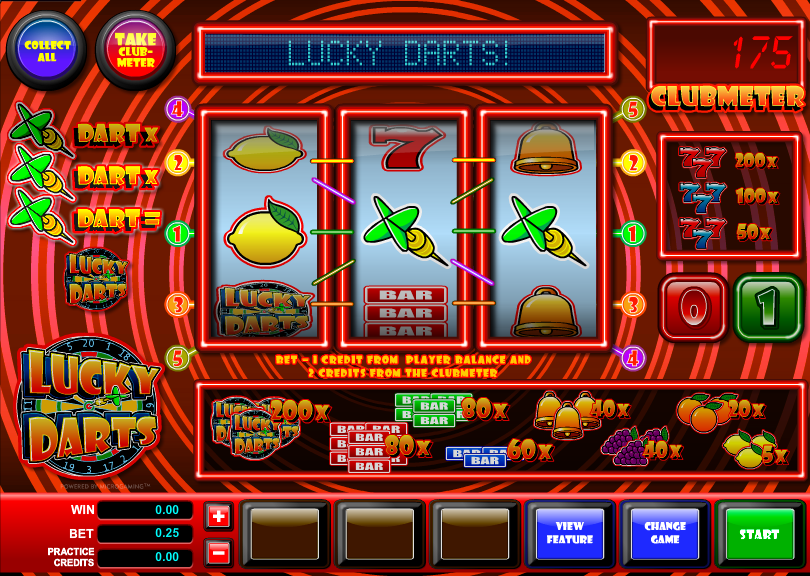 Step up to the oche and try your luck with Lucky Darts, a feature-packed three reel online slot from Microgaming based on the athletic world of darts. Don’t be fooled by it’s lack of five reels and numerous paylines, this game will keep you busy and have you reaching for the arrows afterwards.

Lucky Darts has three reels and, in the base game, just one payline. The symbols are of the traditional variety and include grapes, bells, bars, oranges, lemons, sevens and bells. There’s also a Lucky Darts logo which is worth 200x your bet if you can land three on the payline. Some symbols will win by appearing just on reels one and two. You can gamble each win on a 50/50 heads or tails bet, you can collect it or you can send ti to the Clubmeter which we shall talk more about shortly.

During gameplay you can switch using the ‘Change Game’ button to play the options below:

This is a method by which you can transfer credits from your credit balance to the Clubmeter; once you have a sufficient amount there you can switch to play the Club Game. At any time you can move the credits back to your balance by using the ‘Take Clubmeter’ and ‘Collect All’ buttons at the top of the screen.

The club game will cost you 1 credit from your balance and 2 from your Clubmeter balance but the prizes for landing a winning combo are greater. From here it’s also possible to trigger the Lucky darts feature by landing three of the green dart symbols anywhere on the reels.

You will be taken to a dart board and you now have three throws to win up to 3000x your bet (that’s for three bull’s eyes). Smaller multiplier values are spread around the board so you know you’ll win something decent here.

We’ve found the return from the basic game to be greater than from the Club Game but maybe that’s just us; while playing the Club Game it’s easy to burn through your credits pretty quickly.

This is a fun game which admittedly does take some getting used to; the best bet is probably to ease your way in with the basic game and dip into the Club Game every now and then.