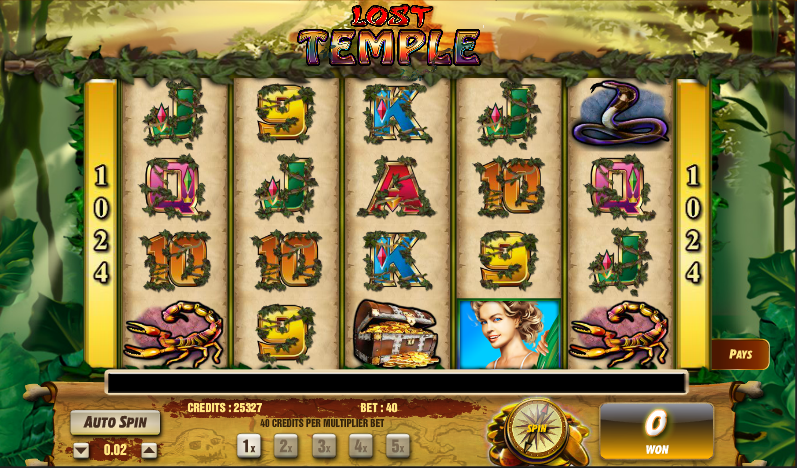 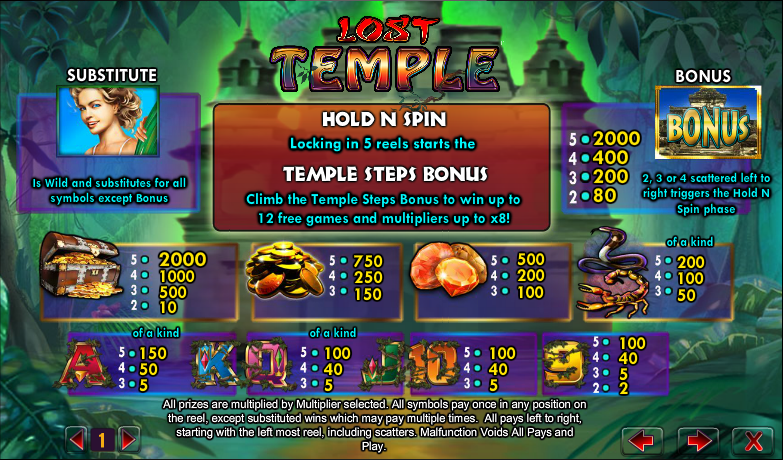 There’s no particular shortage of online slots based on the exploration of mysterious temples in far off lands and in Lost Temple we have one more to add to the list. This one’s from Nextgen Gaming and although it may be a little dated compered to some of their newer slots it’s still well-designed and includes some creative features.

Lost Temple is a five reels and 1024 ‘ways to win’ slot which means that the usual payline structure is dispensed with; instead, adjacent matching symbols from left to right on the reels will earn you a win. The backdrop to those reels is a murky jungle environment wit faint rays of sunlight struggling to make themselves seen.

The low value playing card symbols are wrapped up in vines and other vegetation and then we have snakes, scorpions, jewels, gold coins and a treasure chest as the main ones.

The wild symbol is a somewhat out-of-place-looking blonde girl and the bonus symbol is the archetypal South American temple.

There’s just one bonus game here but it’s a good one; you will need to trigger it by landing two, three or four of the temple scatter symbols anywhere on the reels after which those reels will change into big locks, freezing them

The remaining reels are then spun again up to three times and if you can land another scatter symbol that reel will also become locked. If that happens the spins are reset to zero and you can try and land scatters on the remaining reels.

If all reels become locked you will move on to the Temple Steps bonus. You can also reach this game by landing five scatters in the base game.

In the Temple Steps bonus you will try to work your way up the steps of a temple by avoiding the red arrow on each level; picking green will move you up one level and the higher you get, the more free spins and multipliers you will receive.

This might be one of Nextgen’s older slots but that doesn’t mean it should be ignored; the graphics are slightly dated but the in-depth bonus feature makes it well worth checking out. It comes with an RTP of 97.04%