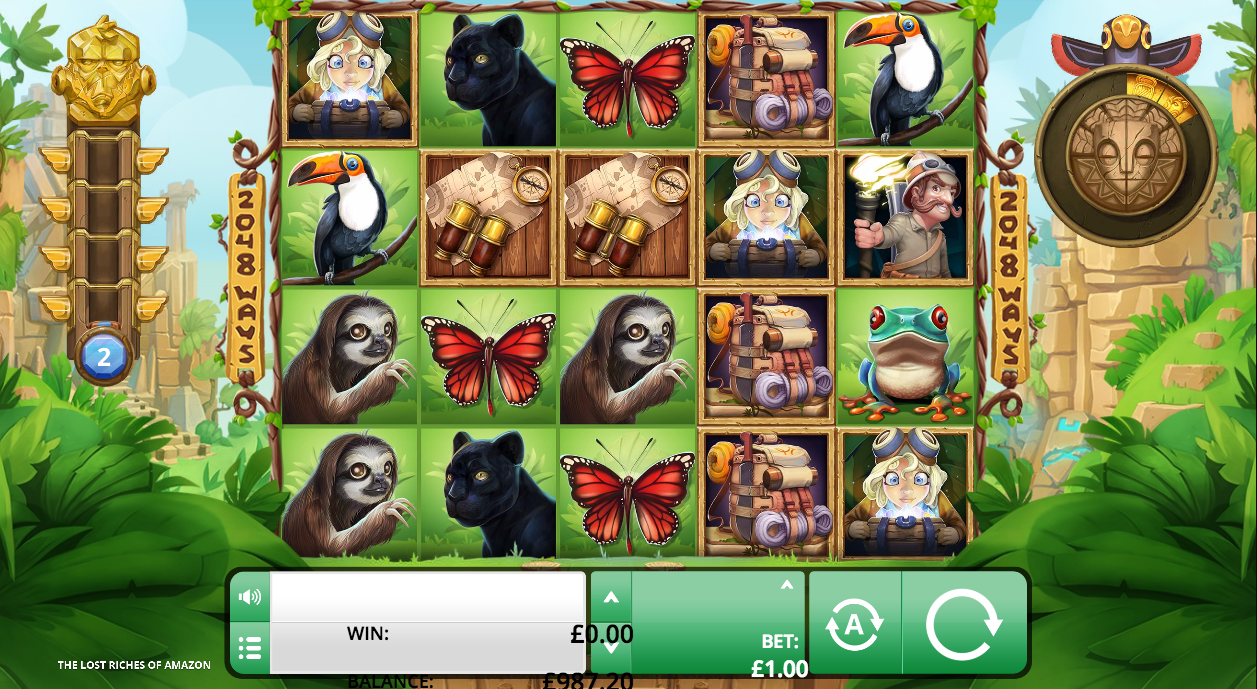 The mighty Amazon runs for almost 7000km across the continent of South America so is it any wonder that treasure hunters have long regarded it as a source of ancient riches; this online slot from Foxium is based on that theme, it’s called The Lost Riches of Amazon you can find out all about it here.

The Lost Riches of Amazon is a five reel slot with four rows and 2048 ways to win; winning combos can be formed from right to left as well as left to right on a set of reels which sits against a backdrop of Aztec temples and verdant undergrowth.

The symbols are all related to the theme and include our male and female explorer, some temple steps, a backpack, a map, a jaguar, a sloth, a puffin, a toad and a butterfly.

The wild symbol is an Aztec mask which will substitute for all others to form winning combos except for the Golden Monkey Head and the Lucky Coin.

Each time a Golden Monkey Head lands on the reels it will be collected and stored in the meter on the left hand side; once the meter contains ten you can collect the bonus or wait until you have twenty, thirty or forty to collect those awards respectively:

If the Lucky Coin appears anywhere on the reels you’ll receive free respins until a win is obtained. More Lucky Coins can appear during this round and the Golden monkey Head bonus can be triggered also.

Each wild symbol which lands is collected in the meter on the right hand side and once it’s full (twelve wilds) the next spin will have three wild symbols placed randomly on the reels (except reel three).

The Lost Riches of Amazon has an attractive cartoonish quality and bonus features which are guaranteed to trigger if you play the game for long enough. It’s definitely worth checking out and comes with an RTP of 96.06%.