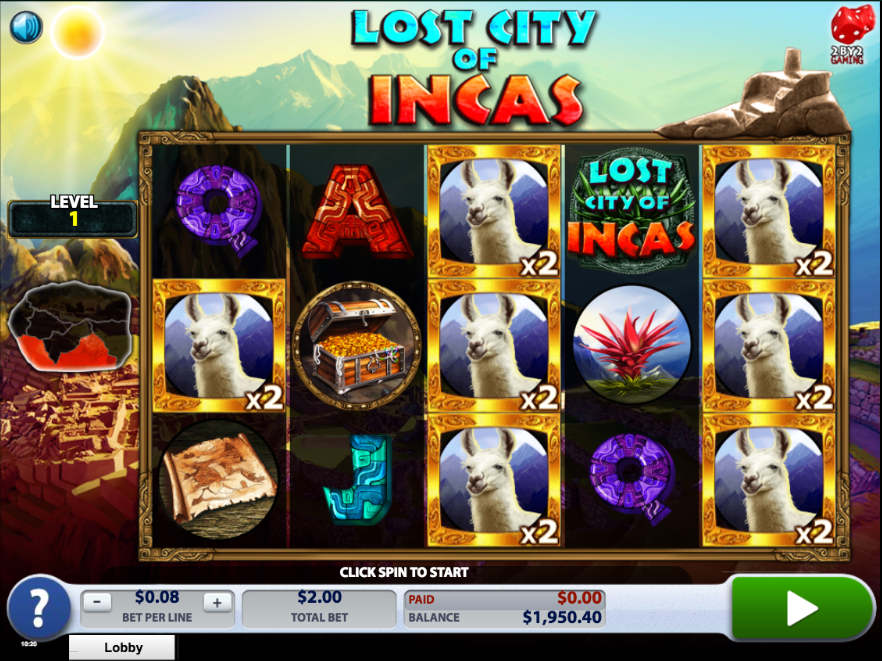 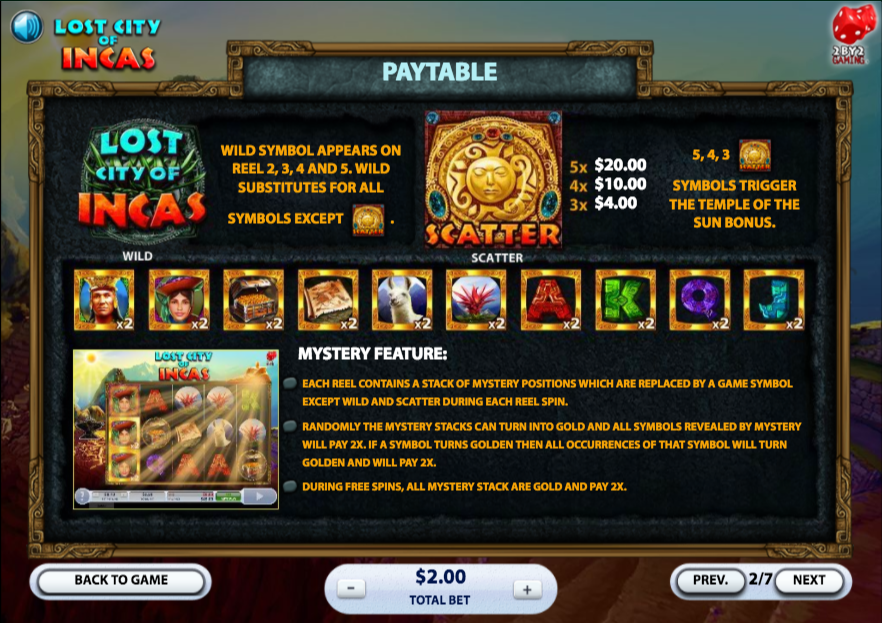 The Inca empire fought it’s last battle around 500 years ago but before that it ruled a significant area on the west side of South America; there are a number of online slots themed on this doomed race but one more can’t hurt and here we bring you Lost City Of Incas, a game developed by 2By2 Gaming and featuring a several extra bonuses.

Lost City Of Incas is a five reel slot with three rows and twenty five fixed paylines; we can’t quite tell what’s behind the reels but considering the theme perhaps it’s the city of Machu Picchu before it fell into ruin.

The high value symbols are the Inca chief, a lady with a jaunty hat, a treasure chest, a map, a llama and a red flower. J, Q, K and A make up the lower values.

The game’s logo is wild, it appears on reels two, three, four and five and it will substitute for all others except the golden scatter symbol.

On each spin stacks of matching symbols appear on the reels; if you are lucky those symbols can be turned to gold and pay 2x any wins they make.

Temple Of The Sun Bonus

This is triggered by landing three or more of the golden sun scatter symbols anywhere on the reels; you will now receive that number of picks on the Inca pyramid and these will determine the number of free spins awarded (up to nineteen).

Only high value symbols are on the reels during the spins and stacked icons (as in the Mystery Feature) will always be gold. More spins can be triggered by landing three or more scatters during this round.

If those stacked symbols in the Mystery Feature turn gold (in the base game) then the artifact to the left of the reels will be gradually filled up; once full it is added to a treasure map on which there are five artifacts to complete. Once all artifacts are complete you get to pick one which will award a multiplier of up to 20x your total stake.

Lost City Of Incas is an enjoyable way to spend your time with plenty of feature diversions offering money-making opportunities. This good-looking slot comes with an RTP of 96.50%