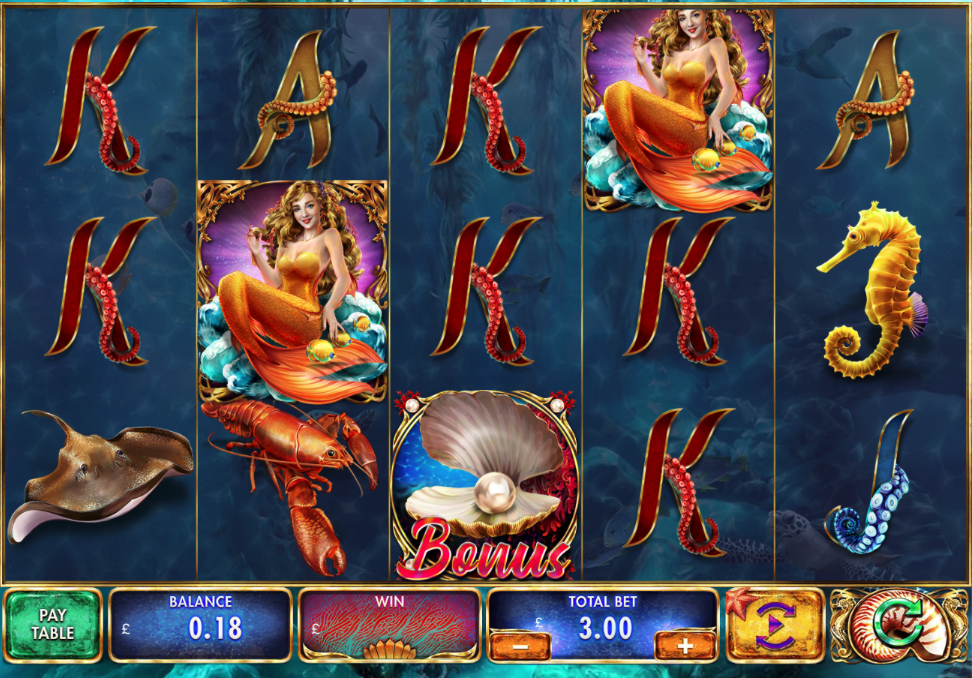 The myth of Lorelei concerns a beautiful German girl who ended it all by chucking herself in a river near a rock called Lorelei after a love affair went wrong; Lorelei’s Pearls is an online slot from Red Rake Gaming which nods in the direction of this story while offering players free spins and the fusion mini game.

Lorelei’s Pearls is a five reel slot with three rows and twenty five fixed paylines; the setting is a sea rather than a river with undersea flora reaching up towards the distant light.

High value symbols include the lobster, the flatfish and the seahorse while J, Q, K and A make up the lower values; the dolphin is wild, Lorelei and the pearl are the bonus symbols.

Landing three of the pearl bonus symbols on reels one, three and five will award fifteen free spins and during this round the lowest value symbols are removed from the reels to make bigger wins more likely.

This is triggered by landing three Lorelei symbols on reels two, three and four and you’ll now get to play on a reel set measuring 7 x 5 which only contains Lorelei and blanks. Seven Lorelei symbols (complete with cash value) will be on the reels to start with and three spins will be awarded – land any more Loreleis and they’ll lock in place and reset the spins to three again.

Symbols landing next to each other will merge and create larger ones – these are worth more when the round ends after you’ve run out of spins. The payout is calculated depending on the size and shape of the symbols which have been created and the there’s a Grand prize of 10,000x the stake if all reel positions are filled. Below is an example of a few of the shapes which can be formed.

The fusion minigame will be familiar to fans of Red Rake slots and it’s a clever feature which elevates their slots above many others; chuck in some free spins as well and Lorelei’s Pearls is engaging stuff.