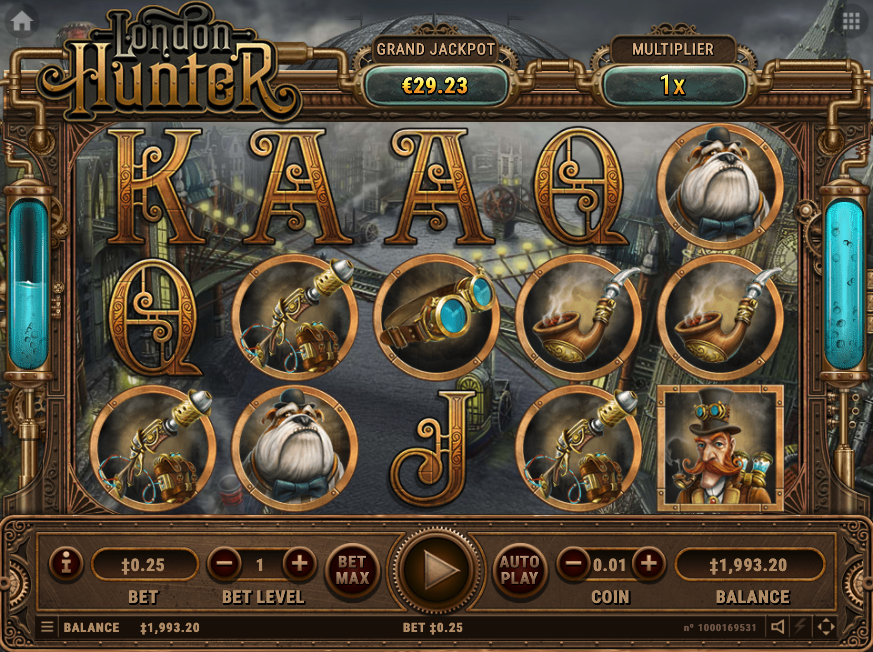 Victorian London, a touch of Steampunk, dinosaurs and what looks a bit like Sherlock Holmes all combine to entertaining effect in this online slot from Habanero Systems; it’s called London Hunter and it promises players expanding wilds and free spins.

London Hunter is a five reel slot with three rows and twenty five fixed paylines; behind those complex, mechanical reels there’s an overhead view of the River Thames which various London landmarks visible in the distant scene.

High value symbols include the Sherlock character, the dog (Watson?), the goggles, the smoking pipe and the mystery object which could be some sort of weapon. The dinosaur is wild, it appears only on reels one and five and it will replace everything to help form winning combinations.

The fuel tanks containing the blue liquid on either side of the reels fill up automatically and they’ll take between four and fourteen spins to do so; the following features reward when they’re full:

After use the tanks empty themselves again.

This is triggered by landing Sherlock anywhere on reel one, the weapon on reel two and the wild dinosaur on reel five; if the left fuel tank is full when the ten free spins start it all kicks off with a 3x multiplier otherwise it starts at 1x. The tanks now take two to six spins to fill – each time the left tank fills the win multiplier increases by 1x and filling the right one will award two extra spins.

The design of London Hunter makes it look quite complex but once you understand how the fuel tanks work it’s pretty straightforward; two clever bonus features, combined with some great graphics and an RTP of 96.72% make this a top notch slot.