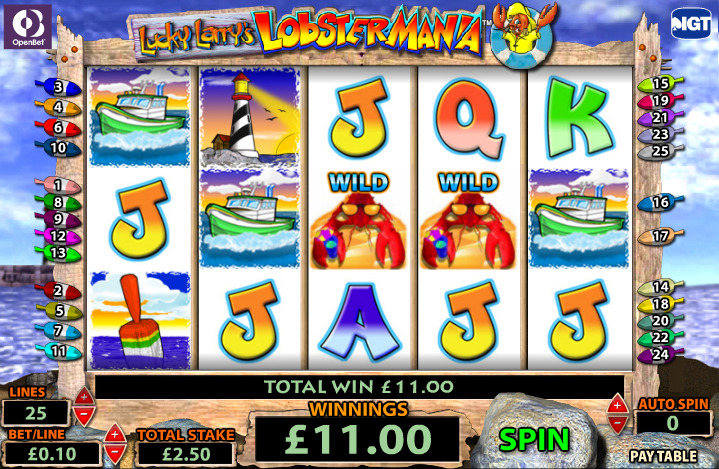 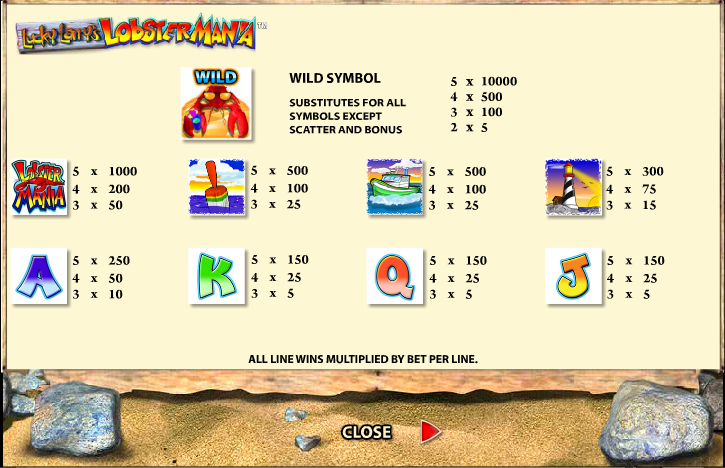 The full title of this fishy online slot is Lucky Larry’s Lobster Mania which sounds like the name of a restaurant and perhaps the destination for the lobsters caught by Larry. It’s a nicely alliterative title though and it’s developed by IGT with a nautical theme. It’s not the most graphically sophisticated game we’ve played but it does have a slightly different bonus feature so keep reading to find out more.

Lobster Mania is a five reel slot with three rows and up to twenty five paylines; those reels are set inside a driftwood frame wedged into a pile of rocks behind which we can see the blue sea under a similarly blue sky. The background music is of course Rock Lobster by the B52s.

There are four high value symbols of a nautical theme and these include a lighthouse, a small fishing boat, a buoy and the Lobster Mania logo. J, Q, K and A make up the lower values.

The wild is represented by the lobster wearing sunglasses and will substitute for all symbols except the bonus and scatter. It’s the highest paying base game symbol and worth 10000x your line stake for five on an active payline. The lobster in a raincoat is the bonus symbol which activates the feature.

Landing three or more Lobster Mania bonus symbols on an active payline will trigger this feature and the first thing to do is pick one of those symbols to reveal the number of picks.

On the next screen you will see Larry watching over a number of lobster pots in the sea and you will pick 2, 3 or 4. Larry will draw these in one by one and remove any lobsters inside – each will be worth a cash prize. When all pots have been raised the round is over.

The Buoy Bonus is triggered by symbols on an active payline so play the maximum number for the best chance of getting there.

It’s the Rock Lobster soundtrack which raises this slot above the norm but it’s decent entertainment as well, especially if you can trigger the Buoy Bonus. There’s an RTP of 94.99%.