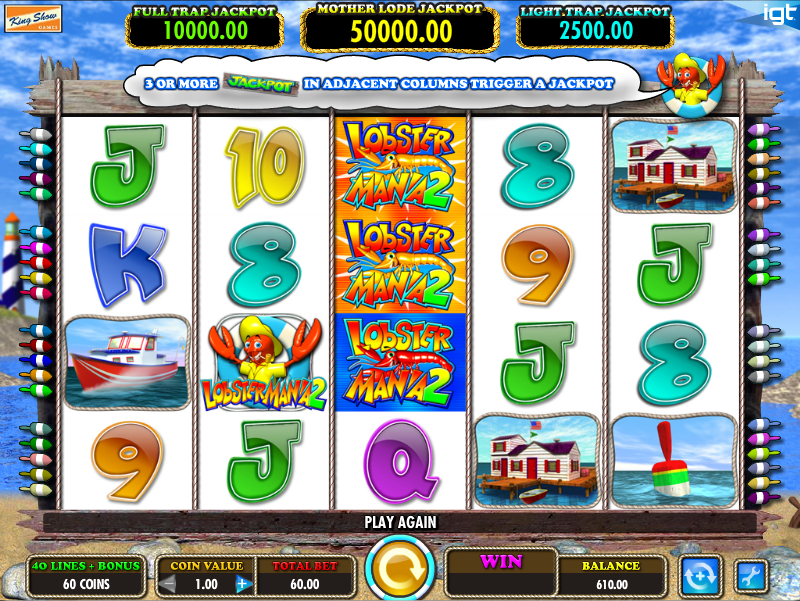 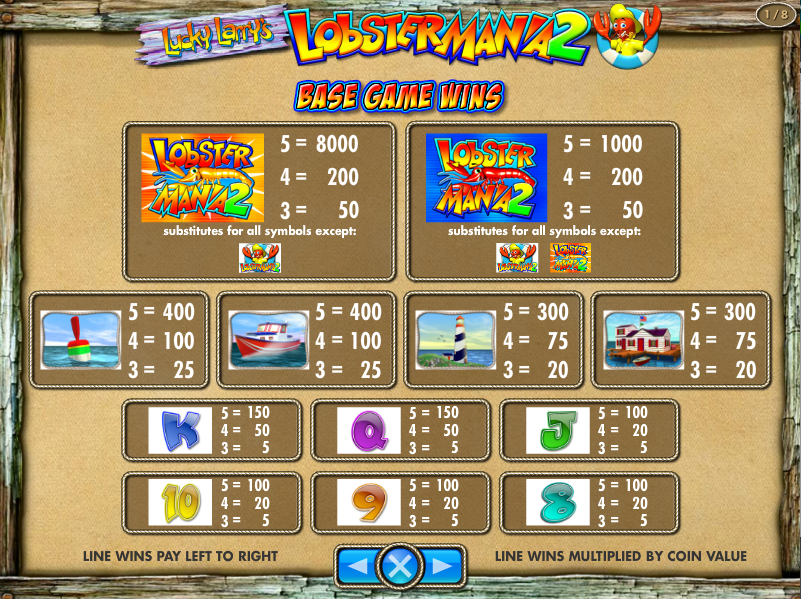 If you’ve played the original Lobster Mani game then you’ll already recognise the design of this nautical-themed online slot from IGT. The full title is Lucky Larry’s Lobstermania 2 and while it’s still all about Larry’s globe-trotting fishing adventures, this sequel has lots more bonus features to enjoy. Read all about it below.

Lobster Mania is a five reel slot with four rows and forty fixed paylines; those reels spin on some nailed-together driftwood behind which is a beach scene complete with rocks, sand and a lighthouse. We’re pleased to see that the same Rock Lobster-style sound effects are in place.

The high value base game symbols include a buoy, a fishing boat, a lighthouse and a floating house while the lower values are the standard 8, 9, 10, J, Q and K (no Ace for some reason).

Both the blue and yellow Lobster mani logos are wild in the base game and they also appear stacked; the bonus symbol is the lobster in the yellow outfit and he’s the key to most of the extra features.

You may notice that some all symbols (except the bonus lobster) have a chance of being attached to a small ‘Jackpot’ icon. If you can land three or more on consecutive reels in the base game you will win the jackpot multiplier amounts above the reels as follows:

This is the main feature and it’s triggered by landing at least three of the lobster bonus symbols on an active payline; you now get to pick between Lucky Larry’s Buoy Bonus 2 or Lucky Lobster’s Free Spins Bonus, both described below.

Select your fishing location from either Brazil, Australia or Maine and you can now make 2, 3 or 4 buoy picks. Each will be worth 10x to 757x the coin value. If you manage to find the Golden Lobster you get an extra bonus round depending on where you are in the world:

Choose this option and you’ll receive five spins with enhanced reels; there’s no jackpot or multiplier feature here but you can re-trigger the feature up to a maximum of 240 spins. 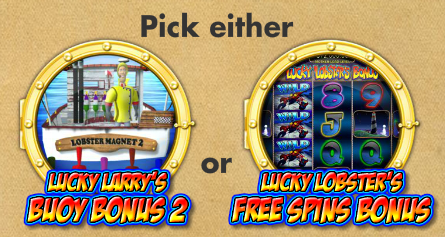 For some extra gameplay excitement then Lucky Larry’s Buoy Bonus is the way to go – it certainly lasts longer.

This is a deserving sequel to Lobster Mania and it’s lots of fun, especially if you appreciate the B52’s music in the background. It’s all very high quality and comes with an RTP of 92.84% to 96.52%.