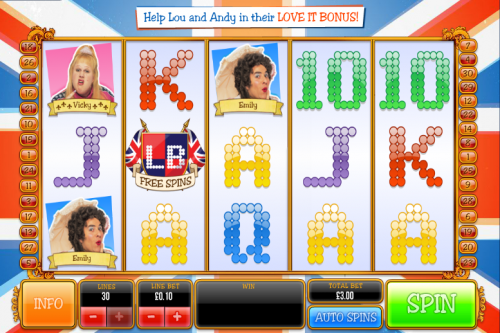 It’s been nine years since the final episode of Little Britain was broadcast; the anarchic comedy sketch show in fact only ran for three years but it left us with some appallingly memorable characters which all feature in this brand new online slot from Ash Gaming.

The animated intro to the game will be instantly familiar to those who watched the show as the voice of Tom Baker narrates a load of comic nonsense to set the scene.  A massive Union Flag is the backdrop to the game, there are five reels and thirty paylines  with the low value symbols represented by playing cards.  Five characters from the show are the higher value symbols and we have Emily (I’m a lady!), Marjorie (Fat Fighters), Dafydd (The only gay in the village), Vicky Pollard (yeah but no but) and finally Lou and his wheelchair-bound friend Andy.  There’s also a Little Britain wild card, a bonus symbol and a free spins LB logo.

There are loads of bonus games in Little Britain as follows:

Trigger this bonus by landing the Free Spins symbol on reels two, three and four; you’ll now receive 10 free spins during which stacked characters become active.  This means you’ll win an extra prize if one of the stacked characters covers the entire reel after which you’ll also win any prizes it creates as part of a winning combo.

Psychiatric patient Anne has her own bonus which occurs randomly; she will shuffle onto the screen and fling wilds at a number of symbols which apply to the last spin.  A big win will bring Conservative supporter Judy onto the screen to vomit up coins.  Check out the video below.

This is the main bonus game and if you can land three bonus symbols on reels one, three and five you’ll be given the opportunity to spin the wheel and choose one of five character-related bonus games as follows:

If you like the show you’ll like this slot – in fact even if you found the show a bit tasteless you’ll appreciate a slot with so many bonus games. There’s a snippet of tasteless comedy around every corner!  Stakes start from as low as £0.01 per payline and rise up to £3.00 for a total bet per spin of £90.00.