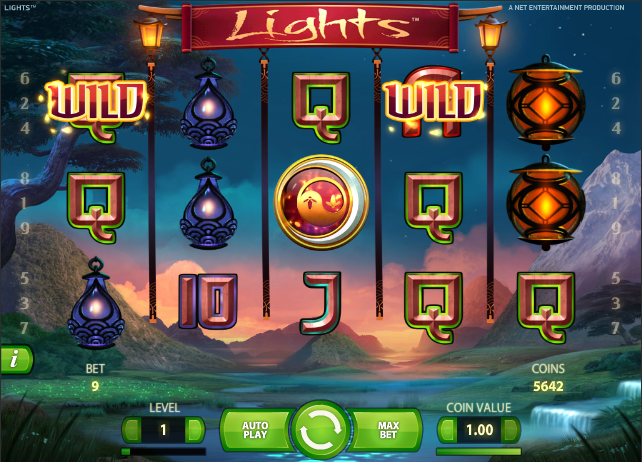 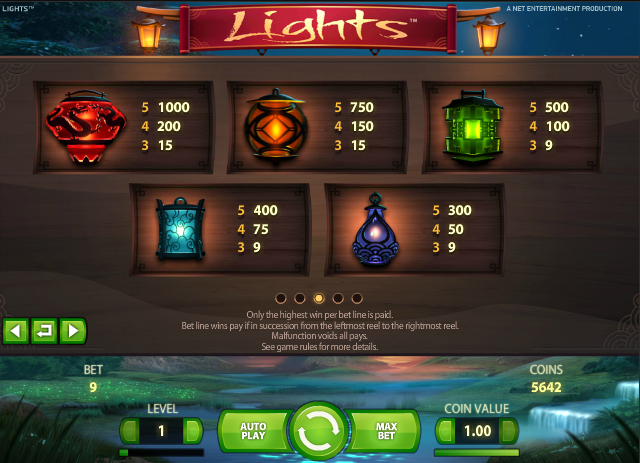 We are delighted to report the long-awaited appearance of an exciting online slot from Net Entertainment. It’s called Lights and we saw a first glimpse of the action several months ago. It joins a large group of games with an Oriental theme but this takes that genre to a whole new level so read on to find out how it works.

Lights plays out over five reels and nine paylines and as soon as you load it up you won’t fail to be impressed by the graphics and the relaxing background music. Reaching for the mute button is entirely unnecessary here. The backdrop to the transparent reels is a view of lakes, mountains and a moonlit sky.

Aside from the standard 10, J, Q, K and A there is a range of beautifully rendered Chinese lanterns and they are coloured dark blue, light blue, green, orange and red.

There’s a big ‘Wild’ symbol which substitutes for all others apart from the scatter; the scatter itself is a kind of ornate Yin Yang symbol.

There are no wild symbols on the reels when you press the spin button; as the reels are spinning, fireflies float about and leave between two and four wilds anywhere on the reels. Of course this guarantees at least two wilds on every spin but the biggest wins are gained by obtaining four.

The Yin Yang scatter symbols are the key to the free spins and landing them anywhere on the reels will reward you with the following:

During this feature, between three and six floating wilds will be added on every spin so this can be a profitable bonus. Additionally, more spins can be triggered by landing more scatters.

We can’t offer much here because there’s zero player interactivity but we would advise everyone to keep the music on to enjoy the Oriental atmosphere.

We make no secret of our liking for Net Ent slots and this one is a real pleasure to play. It’s admittedly quite tough to trigger the free spins but who cares when the gameplay is as appealing as this.