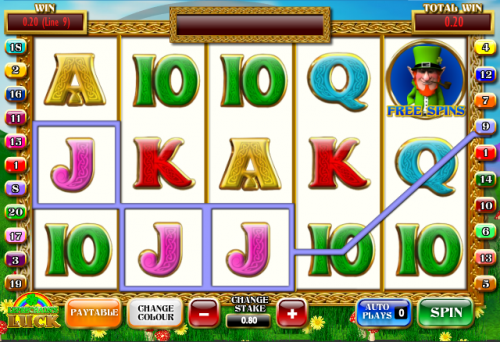 If you check out our review for Net Entertainment’s Golden Shamrock and then read the following post you could be forgiven for thinking that there’s some sort of competition to produce the most twee, Irish online slot machine around.  This one’s from Ash Gaming and it’s certainly giving Golden Shamrock a run for it’s money.

As the name suggests it’s all about leprechauns and it’s five reels and twenty paylines contain a wealth of Irish-related symbols.  It’s set against a background of Guinness, gold coins and greenery and the low value playing cards are adorned with a Celtic pattern.  High value symbols includes toadstools, a pint of Guinness and a harp.

Special symbols include a Leprechaun’s Luck wild, a Pot of Gold bonus, a Leprechaun Free Spins symbol and a Wishing Well.  This slot also features a progressive jackpot for the opportunity to win the big bucks.

To land this mini-game you’ll need to spin three or more of the Pot of Gold bonus symbols and this will start the game.  You’ll be taken to a screen featuring a rainbow with a number of multipliers.  There’s a dial at the bottom which you need to spin and the result will move you across the rainbow to higher multipliers; keep going until you reach the Pot of Gold or you spin the dial on ‘Collect’.

Landing three, four of five of the free spins symbols will grant you free spins.  While you’re playing this game there are couple of bonus features to spice things up:

Leprechaun’s Luck features the chance to win the gigantic progressive jackpot and you nab it in a couple of ways, both via the bonus games.  When you reach the bottom of the well in Wishing Well bonus, there’s chance of finding the gold down there which will win the jackpot.  The other method is to light up all colours on the rainbow in the Rainbow of Wealth bonus.

If you can get past the cheesy Irish-ness of this slot it’s great fun to play and the range of bonus features make it a winner for us.  The prospect of a giant progressive jackpot win is the icing on the cake.