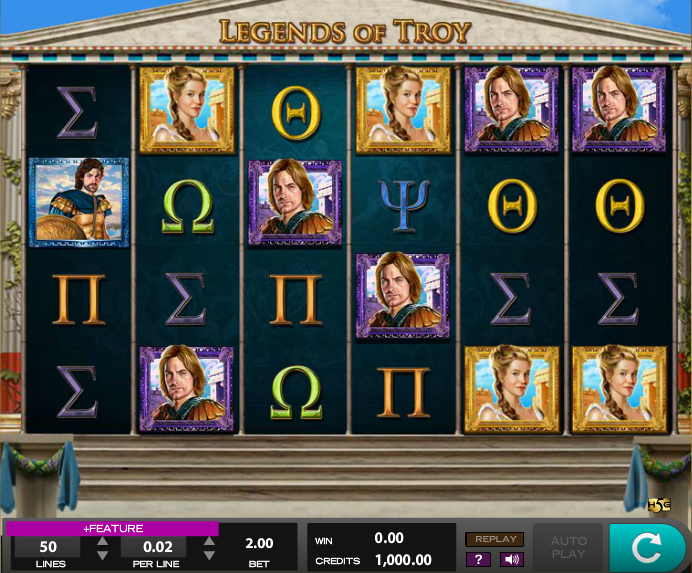 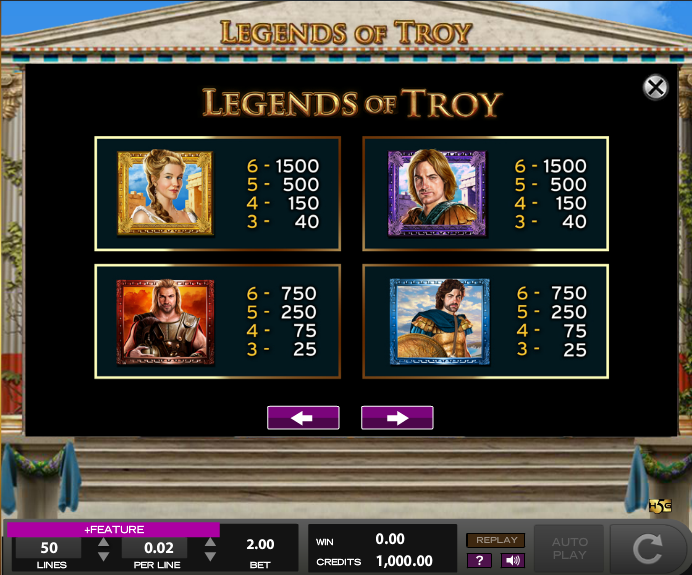 The ancient Greek city of Troy was located in what is now western Turkey and it was the setting for the Trojan War which Homer described in the Iliad. Fortunately we now have an online slot machine to add to the story – it’s called Legends Of Troy, it’s developed by IGT/High 5 Games and it comes with two separate bonus features.

Legends Of Troy is a six reel slot with four rows and up to fifty paylines; those reels spin on the walls of a large temple and there’s just a small glimpse of blue sky in the upper corners. There’s no background music but there are various sound effects when you spin the reels.

The wild symbol is a bronze shield which can appear stacked on the reels – it replaces all others except the Trojan Horse scatter which activates the main feature.

This is an extra feature which you can activate by clicking the +Feature button below the reels with all fifty lines played. It will double your stake but each wild which lands on the reels will now have a chance of awarding a cash prize as well as being a wild symbol. The value of the award increases from reels one to six with a maximum payout of 10000 coins.

This is triggered by landing three or more of the Trojan Horse scatter symbols anywhere on reels two, three, four or five:

There are some different symbols in use but the payouts are still the same; more spins can be awarded by once more landing three/four scatter symbols up to a maximum of 105 spins. The Scatter Bucks feature will be active during the free spins is you’ve chosen to play it in the base game.

Legends Of Troy is a little on the basic side but it’s worth a pop for it’s historical theme and the detailed symbols on show.We like the ability to pay for an extra feature and there’s an RTP of 94.90%.