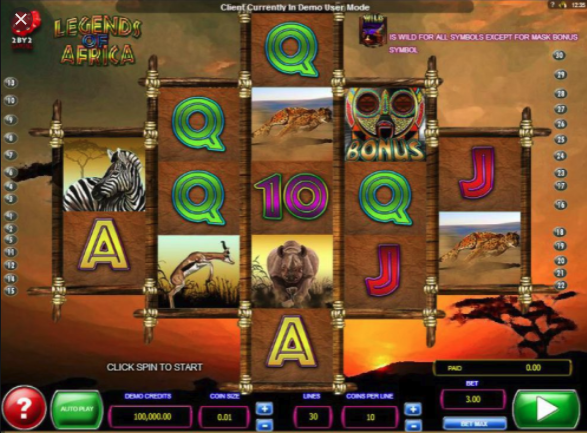 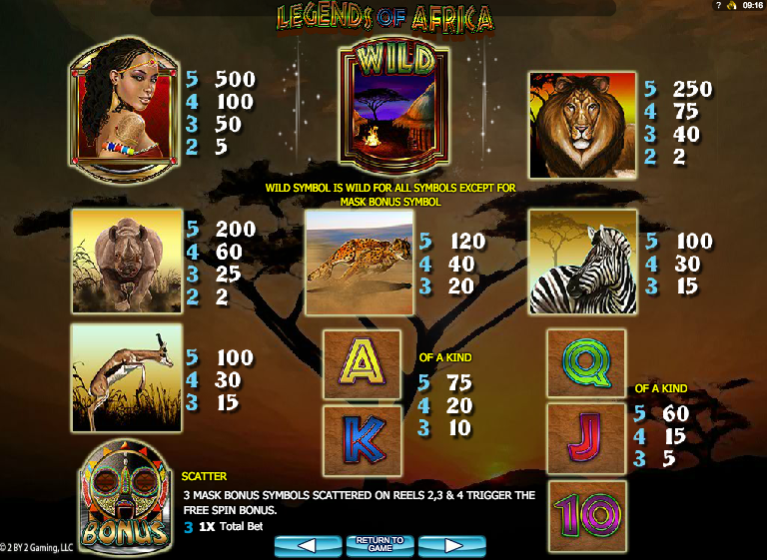 The chances of us going on a genuine African safari are largely dependent on a gigantic win while playing an online slot machine so in the meantime we’re going to have to make do with a virtual visit to this vast continent by playing a game such as Legends Of Africa; this is a game developed by 2By2 Gaming with an unusual reel structure and several bonus features and it’s all described below.

Legends Of Africa is a five reel slot with the payline layout that you can see in the screenshot above and thirty fixed paylines; the reels spin a wooden frame and there’s a lovely background featuring various animals roaming around in front of a setting sun. Wildlife noises accompany your gameplay in an unobtrusive manner.

The higher value symbols include an African girl, a lion, a rhinoceros, a cheetah, a zebra and an ibex; 10, J, Q, K and A  make up the lower values.

The wild is represented by a village scene and it will replace all other symbols except the scatter – that’s a tribal mask which activates the main feature.

Symbols can appear stacked on the reels and if you can land two stacks on reels one and five the payline structure will change for that spin into one which pays any way, not the just the thirty initial paylines. If there are no wins to be made you will receive a consolation prize of 5x the line bet.

This is triggered by landing three of the mask scatter symbols on reels two, three and four and you will now get to pick one of those masks which will determine your award:

Legends Of Africa is a really atmospheric slot with some great quality graphics and some well-applied sound effects; the feature seems reasonably easy to trigger and there’s some welcome variety in the free spins round – check it out!