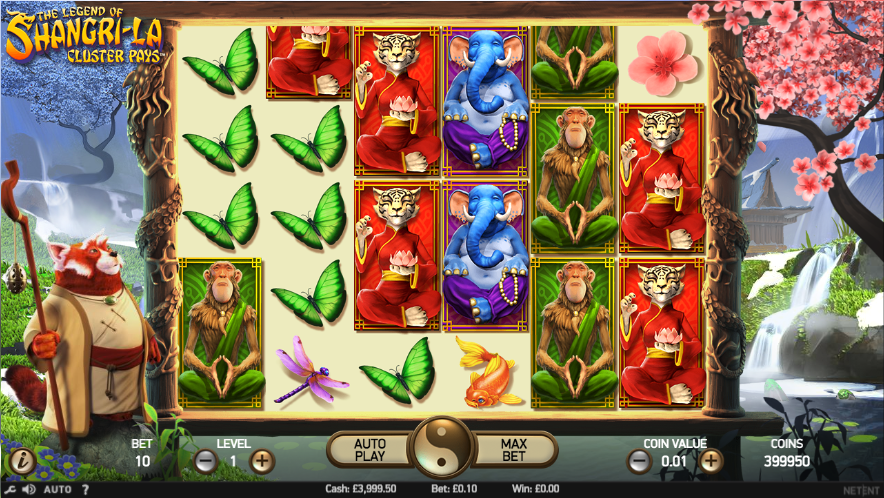 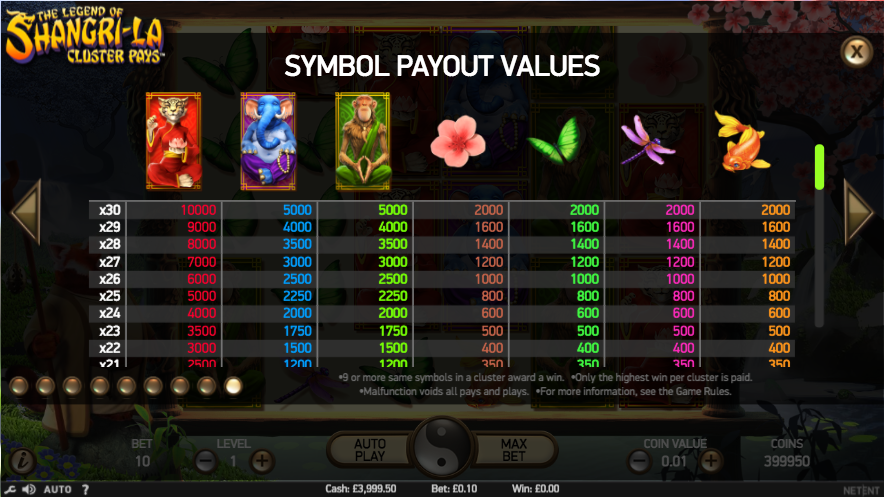 If you’ve previously played Net Entertainment’s entertaining Aloha! Cluster Pays then you’ll be pleased to learn of the release of a related game with a much longer title – The Legend of Shangri-La: Cluster Pays – which is themed on the mystical Himalayan kingdom first described by author James Hilton in 1933.

The Legend of Shangri-La: Cluster Pays is a six reel slot with five rows and a similar gameplay mechanic to Aloha! in which your aim is to create groups of at least nine matching symbols grouped horizontally and vertically rather then left-to-right paylines. Our guru stands to the left of the reels in front of a charming landscape of mountains, blossom and waterfalls.

There are three (guru) symbols which are two positions high – the cat, the elephant and the monkey – along with a peach-coloured flower, a green butterfly, a purple dragonfly and a goldfish.

The wild is a green question mark which will transform into whichever symbol provides the best payout if a cluster is possible; it won’t replace the Free Spins scatter symbol though.

This is triggered by landing three, four, five or six of the Free Spins scatter symbols anywhere in view; they occupy two reel positions so you only need half a symbol in view to make it active.

You will now receive 5, 6, 7 or 8 spins respectively and after each spin between two and six wilds will be added to the reels – the first two will be placed randomly but any further ones will go next to a cluster. If the total prize from this round is less than 10x the total bet you’ll get one more spin.

This may be triggered by landing at least two clusters of at least four matching symbols in the base game and wild symbols will be added to the reels until those clusters join up for a payout.

This may be triggered by landing two matching clusters of between five and eight symbols; you’ll now receive a free respin with those clusters frozen in place. Each extra matching symbol landing will award an extra spin until the final payout.

This can occur when two Free Spins scatter symbols land on the reels and another one lands just out of view; that third symbol may be nudged into view to trigger the free spins.

The Legend of Shangri-La: Cluster Pays is a very playable addition to the ‘Cluster Pays’ line up with an intriguing theme, some relaxing music and lots of bonus features to aim for. It looks good, sounds good, it’s definitely worth trying out and it comes with an RTP of 96.59%.