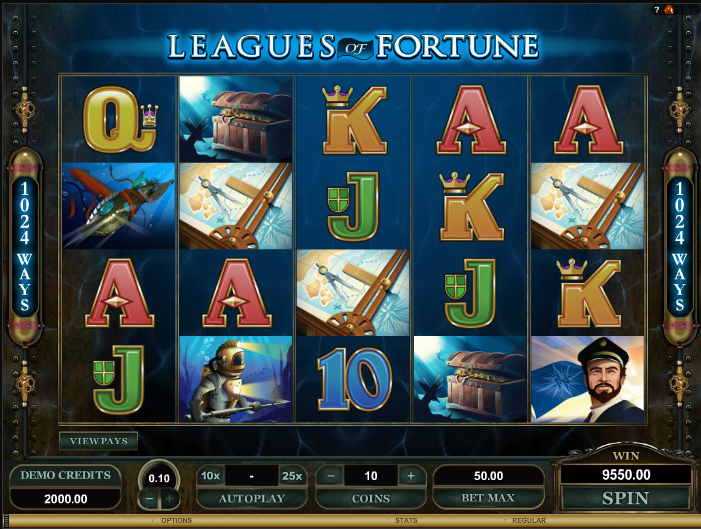 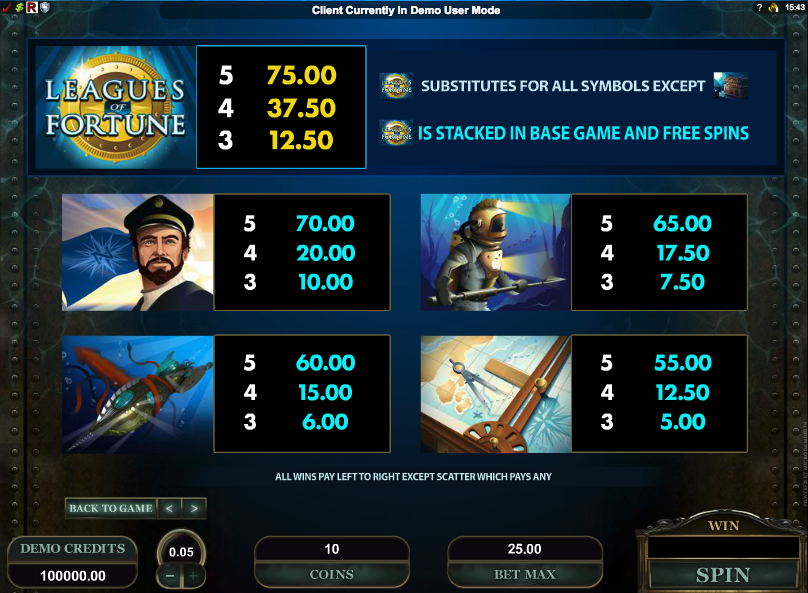 Leagues of Fortune is an online slot set deep under the sea and the look and feel of the game suggest a distinct similarity to the famous Captain Nemo in the Jules Verne novel, Twenty Thousand Leagues Under The Sea.  The antique diving suit, the Nautlius-like submarine – it’s all here in this addictive game.

This is a five reel and 1024 payline game and the reels give the impression of being set against the submarine’s window with the murky depths outside.  10, J, Q, K and A represent the lower value symbols while the higher value ones are mapping instruments, the submarine, a diving suit and the captain himself.

The Leagues of Fortune symbol is the wild symbol and the chest full of treasure is the scatter which triggers the bonus game.

This is the main feature and you can trigger it by landing three, four or five of the chest scatter symbols anywhere on the reels; you will then be treated to a game of cat and mouse between the submarine and a giant squid which attempts to strike the vessel.  Each time it lunges a tentacle will hit a symbol, changing it into a number of free spins.  When it’s finished the free spins round will start with all prizes subject to a 5x multiplier.

Check the video below for the free spins round.

Paylines don’t work in the normal way with this feature and you can win not just with symbols in adjacent reels, but also from right to left as well.  It seems to produce more regular wins but for smaller amounts.

This gamble feature makes a refreshing change from the usual black/red double-your-money choices and after you choose the option, you will be taken to a screen where you can choose your risk; you will notice the red and blue segments of the spinner increase and decrease as you raise and lower your potential win amount.

Now spin the wheel and hope for the best!

Leagues of Fortune brings much of the romance of the original Jules Verne novel to the slots screen and the bonus game involves some great animation featuring the giant squid and the submarine. This game comes with an RTP of 96.49%