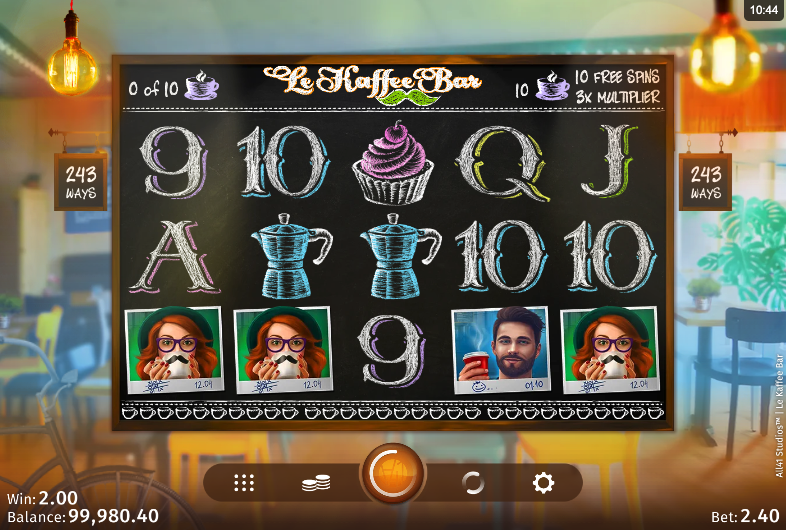 The interior of a Dutch coffee shop may not seem like the obvious inspiration for an online slot machine but with Le Kaffee Bar, Microgaming/all41studios have produced something very engaging indeed which offers players free spins and locked wild symbols.

Le Kaffee Bar is a five reel slot with three rows and 243 ways to win; the symbols replace the price list on a blackboard which floats against a backdrop showing the inside of this particular coffee shop.

The high value symbols are three coffee-drinking customers, a coffee pot and a cupcake while the lower values are chalk-drawn 9, 10, J, Q, K and A. The character symbols can appear stacked on reels two, three and four.

The wild symbol is created via one of the bonus features and it will substitute for all standard symbols; the scatter is the coffee cup and key to the main feature.

This is triggered by landing exactly three matching symbols in a horizontal or vertical line anywhere on the reels; you’ll see a short animation as the middle symbol turns wild and then you’ll receive a free respin with that wild held in place. Any new three symbol combos will continue this feature.

Below the reels you’ll see thirty spaces to be filled each time a coffee cup scatter symbol lands on reels one and five; once ten have been collected the free spins can be collected but you can wait until twenty or thirty coffee cups have been snagged for a greater number of spins:

There are no coffee cups during the spins so it’s not possible to trigger any more spins from within this feature.

There’s a relaxing atmosphere to Le Kaffee Bar which tempts players to the spin the reels for a bit longer; the coffee cup collection feature just adds to that with a bonus feature which is pretty much guaranteed to hit if you play long enough.