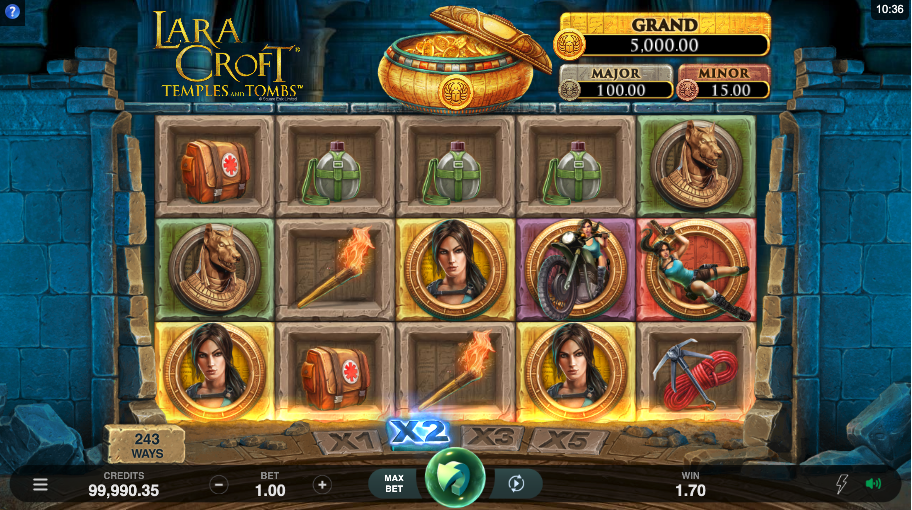 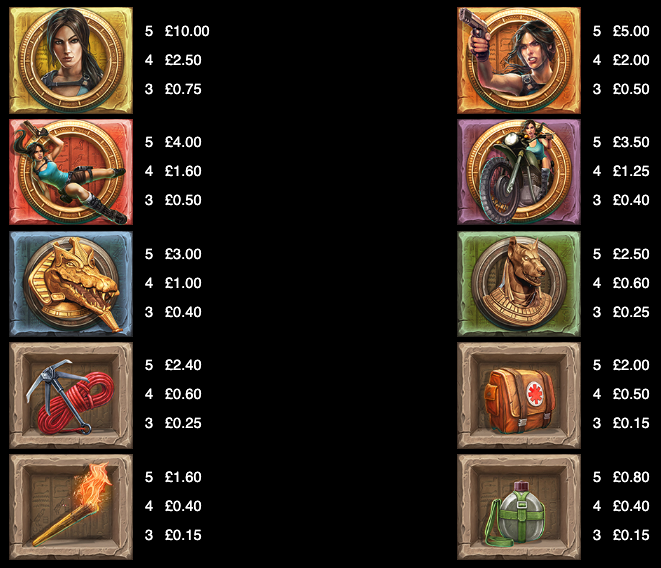 Lara Croft first appeared on our gaming screens in 1996 so it’s something of a triumph that she doesn’t seem to have aged much in a quarter of a century; it’s now the turn of online slots fans to appreciate Lara’s action in Lara Croft: Temples and Tombs, a release from Microgaming with Rolling Reels, free spins and jackpot prizes.

Lara Croft: Temples and Tombs is a five reel slot with three rows and 243 ways to win; those reels spin in a demolished wall behind which are some slightly out-of-place Egyptian hieroglyphics to progress the mystery.

All the symbols are related to the theme and include our heroine in various action poses (which will be recognisable to fans of the video game), two Egyptian gods, her grappling hook, her backpack, a flaming torch and a water bottle.

The wild is a golden ankh which appears on reels two, three and four and which will substitute for all other symbols to help form winning combinations. The bonus symbols is Lara’s famous diary.

Always a favourite, Rolling Reels means that any symbols in a winning combo will disappear and be replaced by more falling in from above, continuing the process; in addition subsequent drops will increase the win multiplier to 2x, 3x and finally 5x.

As you spin the reels you’ll notice that coins will fly from the wild symbols into the pot above – after each Rolling Reels session there’s a chance that the jackpot game will trigger. The more wild coins you’ve collected, the better chance there is of winning a higher jackpot prize – the highest is 5000x your stake.

This is triggered by landing three of the diary bonus symbols (wilds can also substitute) anywhere in view for which you will receive an initial eight free spins although these can be retriggered in the same way. Rolling Reels are also active during this round.

As fans of almost every Tomb Raider video game we’re pleased to say we like Temples and Tombs too – from the Rolling Reels to the ever-present jackpot promise and the appropriate graphical style, it’s all good so give it a try.