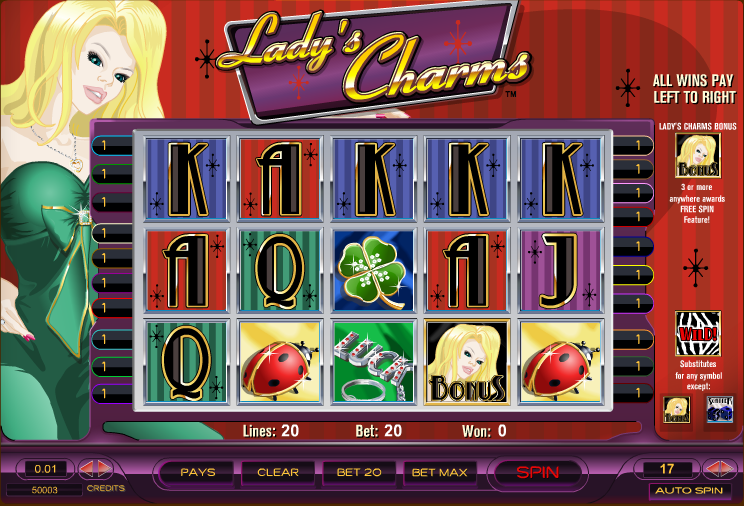 Lady’s Charms is an online slot from Amaya Gaming with a pleasing retro aspect to it’s design. The position of the apostrophe in the title suggests that this game is about the charms of just one lady rather than the charms of many and so there’s a dual meaning here – the allure of a beautiful lady and the lucky charms which make up the symbols.

Lady’s Charms is a five reels and twenty payline slot and and the lady in question is overlooking the reels from the left hand side; we’re placing the design of this game sometime in the 1960s but we stand to be corrected.

The symbols are all nicely rendered, even the standard playing card icons but the more valuable ones look really polished; they are all gleaming and include a four leaf clover, a lucky rabbit’s foot, a key ring and a lucky ladybird.

The bonus symbols include dice scatters, a zebra-patterned wild and a bonus symbol featuring the blonde-hared girl herself. The wild symbol will substitute for all symbols except the scatter and the bonus but it will act as a 2x multiplier for any winning combos to which it contributes.

If you can land three or more of the blonde lady scatter symbols anywhere on the reels you will win yourself entry into this mini-game. The scatter will pay the appropriate prize before the next part of this feature begins.

You will be shown four charms so pick one and this will reveal the number of spins between two and seven; then pick one of four clovers to give you a multiplier of between 3x – 6x. The spins will now take place and hopefully win you plenty of money.

We weren’t expecting much from this slot in all honesty but in fact it tuned out to be quite engaging – it looks and sounds good and it’s not a bad way to spend some of your time.