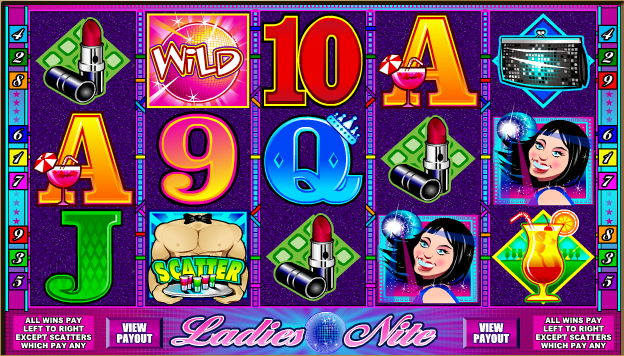 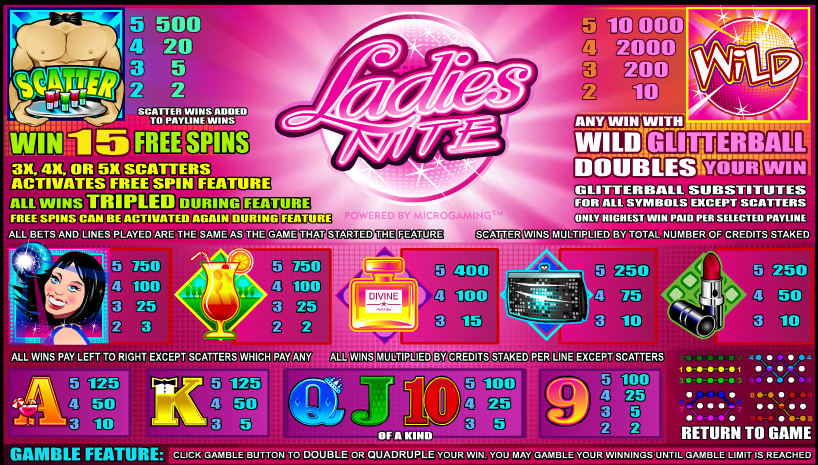 Ladies Nite online slot is Microgaming’s nod towards that most notorious of weekend activities; perhaps they’re referring to the promotions offered by clubs and bars to attract men or maybe it’s all about that pre-marriage party – the hen do.  Possibly even it’s a reference to the type of night out popularised by films such as The Full Monty.

But let’s not overcomplicate the story behind this slot; it’s a five reel and nine payline game which whizzes along at breakneck speed; the soundtrack is a good one featuring the constant background chatter of a busy bar – each time a winning combination is landed you’ll get a short riff of some 1970s-style disco tune.

The basic symbols are represented by playing cards but the higher values are all theme-related so we have some lipstick, a cocktail, a sparkly handbag, some perfume and finally a young lady boogieing under a mirror ball.

Special symbols are a pink glitterball wild and a the torso of a muscly waiter with a tray full of shots which is the scatter.

free spins round available and you can trigger that by landing three, four or five of the waiter scatter symbols.  Any prizes won during your fifteen spins will be subject to a 3x multiplier.

The good news is that you can re-trigger the spins by landing at least three more scatter symbols during this phase.

The wild pink glitterball is active during the main game and if it’s part of a winning combo will double that win.

Like many Microgaming slots, Ladies Nite includes a handy gamble feature so that those of us who want more than just a symbol win are happy.  It’s a card game prediction-style affair so if you can choose the correct colour you can double your money; select the right suit and you can quadruple it.

Although this slot wouldn’t qualify as state of the art these days it’s good fun; wins seem to roll around less often but are bigger when they do land.  The soundtrack will be appreciated by anyone who enjoys some 70’s disco sounds.