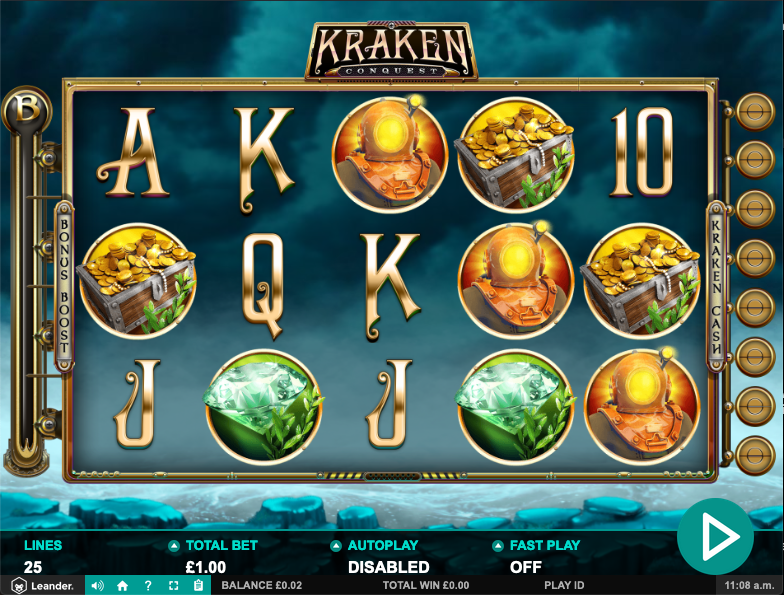 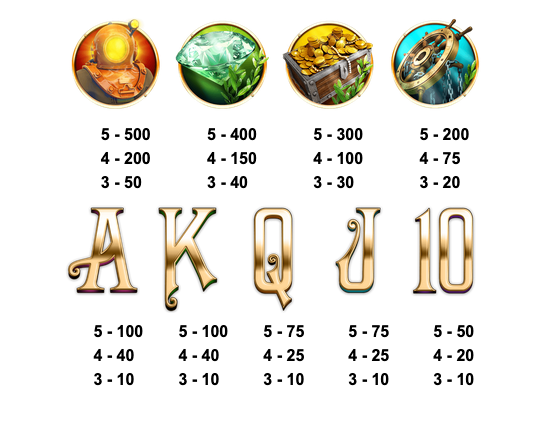 The Kraken is the mythical giant squid of Norse legend, responsible for the destruction of numerous ships in the chilly Scandinavian waters; it’s also now the theme of Kraken Conquest, this online slot from Leander Games which offers players numerous fishy bonus features and free spins.

Kraken Conquest is a five reel slot with three rows and twenty five fixed paylines; the symbols spin within a golden frame suspended above the freezing Arctic waters and there are meters attached to either side which we’ll explain shortly.

High value symbols include the deep sea diver, the green jewel, the box of coins and the sunken ship’s wheel; 10, J, Q, K and A represent the lower values.

The Kraken’s tentacle is wild and it will replace all standard symbols to help form winning combos; the Free Spins and tentacle multipler symbols are the bonus icons.

This is triggered by landing three of the Free Spins symbols anywhere on reels one, three and five for which you’ll receive an initial eight free spins; there’s a 2x multiplier to begin with but each time two bonus symbols appear it will increase by 1x up to a maximum of 8x. Three bonus symbols will award eight more spins indefinitely.

To the left of the reels is the Bonus Boost meter which is partially filled each time Free Spins symbols land on reels one and three; doing this four times will fill the meter and trigger the Oculator Free Spins.

Multiplier tentacles appear on reels two, three and four with values of 2x, 4x and 8x; each value is collected and added to the Cash Meter to the right of the reels and when it’s full the Kraken Cash bonus is triggered. This is a picking round in which you guide a diver to the ocean depths over eight levels, winning cash prizes, extra lives and level ups tied to the multipliers you’ve collected in order. Finding a Kraken Attack will remove one of your lives but if you can reach the final level you’ll battle the Kraken in another picking game with a potential prize of 188x your stake.

The following two features can occur on any spin:

Kraken Conquest is a very high quality slot in which the numerous features tie in nicely with the legend of the giant squid; the Bous Boost is a nice touch which makes it seem as though the free spins are just around the corner.