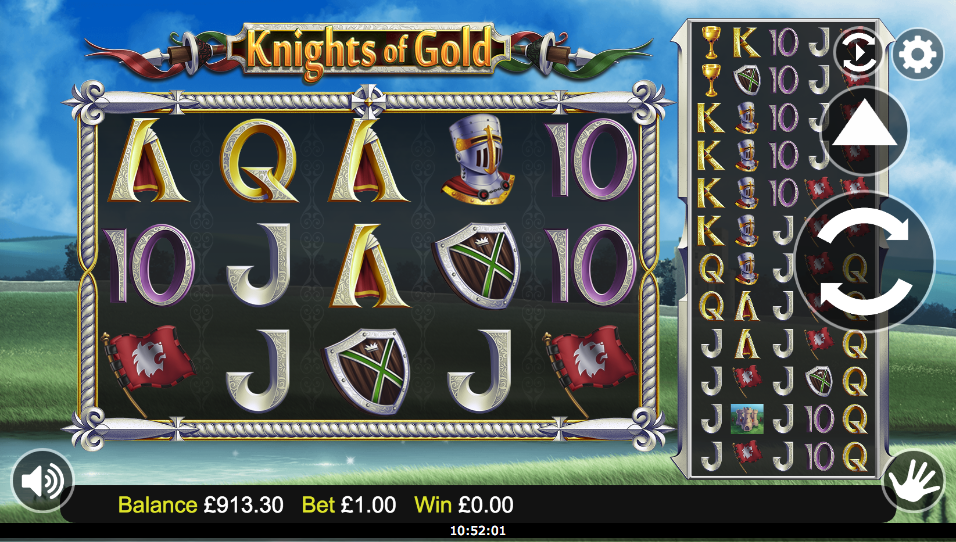 Garb your time-travelling suitcase because it’s time once again to head back to the mediaeval era of an unnamed country in the company of Knights of Gold; this is an online slot developed by betdigital with two separate reels and numerous bonus features.

Knights of Old plays out on two sets of reels as you can see from the screenshot above – they both have five reels but the one on the left has three rows while the one on the right has twelve; this means a total of one hundred paylines. The only time these two sets of reels are connected is when wild symbols fill one reel on the left hand side, they are then copied over to the matching reel on the right.

The high value symbols include a castle, a green/brown shield, a red flag, some helmet armour and a gold cup; 10, J, Q, K and A make up the lower values.

The sword is wild and it will replace all others to help form winning combinations except for the round shield bonus symbol.

This is triggered by landing at least three of the green/brown shields on either reels and you’ll see that the left hand set will now fill with these shields; just keep picking them for prizes until you find ‘Stop’.

Trigger this by landing three of the round shield bonus symbols anywhere on reels two, three and four (landing them on just two of those reels will award a respin of the third reel for an extra chance); you can now choose from the following options:

But there’s more – before those spins start pick a flag to reveal one of the following extra features:

It’s also possible to trigger more spins by landing more bonus symbols during this round.

Knights of Old is a very playable slot, perhaps because of the two sets of reels but also because of the variety of bonus features and enhancements on offer; the graphics are clear, colourful and there’s an RTP of 95.12%.