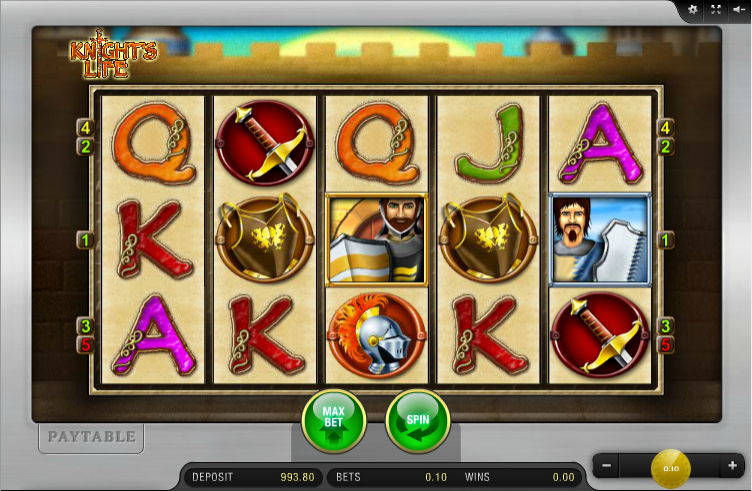 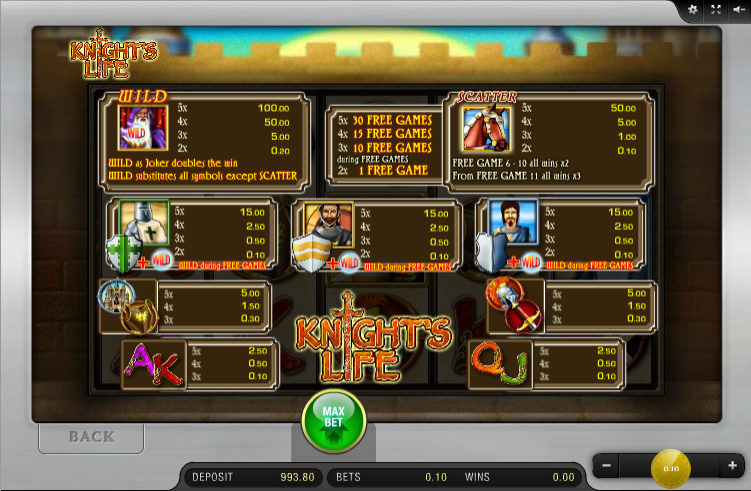 In the rose-tinted world of cinema and fiction the life of a Knight in the middle ages was a pretty attractive affair involving castles, alcohol, glorious victories and wenches; in reality it was almost certainly a grim and unforgiving existence but this online slot from Merkur Gaming tends towards the former with it’s depiction of gleaming armour and blue skies. It’s called Knight’s Life and it’s described in detail below.

Knight’s Life is a five reel slot with three rows and just five fixed paylines; those reels are set against a backdrop of the castle walls over which we can just make up the rising sun. As with several other Merkur games, you will be greeted by a robotic voice saying the name of the game when you first load it up.

Three heroic Knights are the most valuable symbols and they’ll also payout for just two on a payline; other symbols include the castle, a breastplate, a helmet, a sword and the usual J, Q, K and A.

The wild symbol is represented by a wizard and he will double any wins to which he contributes; he won’t substitute for the scatter which is a horse and the key to the main feature.

This is triggered by landing three or more of the horse scatter symbols for which you will receive:

During the spins, all wins from the sixth spin onwards will be multiplied by 2x, from the eleventh spin they are multiplied by 3x. Additionally the three Knights become wild symbols will the spins are underway.

Additionally the spins can be retriggered with more scatter symbols – even two will award one extra free spins.

Knight’s Life is a similar design to many other Merkur releases but it includes a bit more in the way of extra features which we generally like to see. It’s fairly basic but quite good fun and comes with an RTP of 95.84%.