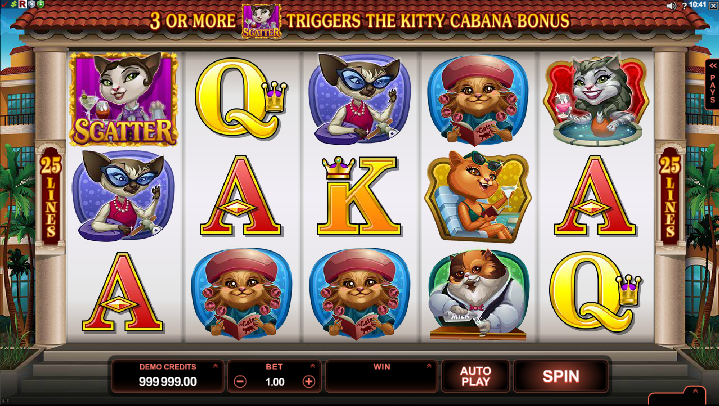 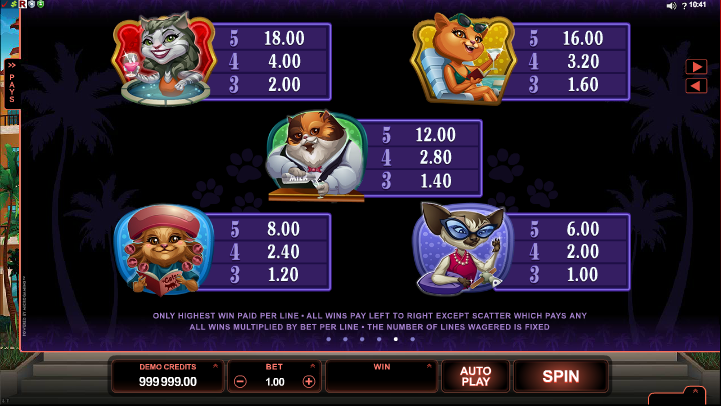 If you thought that cats went to catteries for their holidays then think again – Kitty Cabana is the destination for any discerning moggy and it’s a luxurious location indeed with spas, champagne and cocktails on the menu. Kitty Cabana is an animal-themed online slot from Microgaming featuring lots of cheerful feline characters enjoying themselves and there are up to 24 free spins available if you can trigger that feature.

Kitty Cabana is a five reel slot with three rows and twenty five fixed paylines; the reels spin within a roofed structure supported by columns on either side. In the background the hotel itself is just about visible.

Five kitty characters are the high value symbols and they all seem to be enjoying themselves; J, Q, K and A make up the lower values.

The Kitty Cabana symbol is wild and can appear stacked in the base game; the scatter icon is a cocktail-carrying moggy who activates the main feature.

This is a randomly-occurring bonus during any non-winning spin in the base game; before the reels stop three wilds will make their way onto the screen and plonk themselves on random positions, helping out for potential wins.

This is triggered by landing three, four of five of the scatter symbols anywhere in view and a mini-game will now begin during which each aspect of the free spins will be determined. You must pick one door from each of three floors of the hotel:

The wilds you pick on Floor One can be:

We like the glitter and sparkle of Kitty Cabana and we also like the in-depth free spins round, although it’s a bit tough to trigger. The animated cats should bring a smile to most faces so it’s well worth a go.