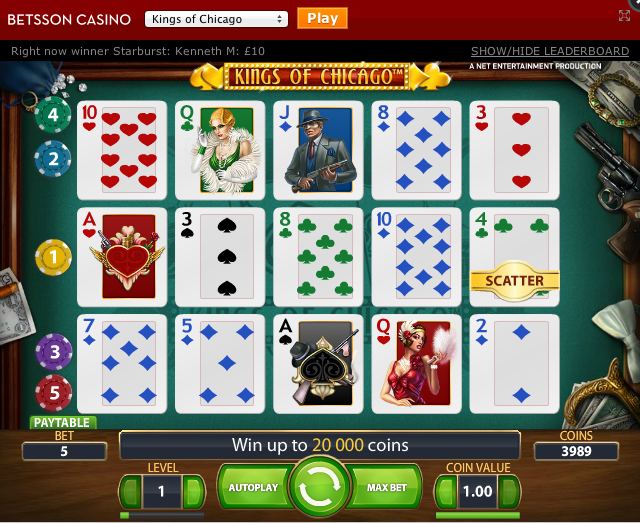 Anyone familiar with online casinos will be well aware of the number of crossover games available to play; there are a number of video slots which take some aspects of blackjack, roulette or bingo and shoehorn them onto the reels and Kings Of Chicago from Net Entertainment is along the same lines with its poker theme.  It’s also no surprise that Net Ent have made a really good job of this online slot.

There are five reels and just five paylines but that doesn’t mean there’s any less excitement in this 1930s-themed slot; the game is based around poker hands so the symbols on the reels are four full sets of playing cards including jokers.  Rather than spinning reels the fifteen cards are spread out across the table by an invisible hand with the last column turned over to add to the suspense.

Over the five paylines you are looking for the following wins:

The joker acts as the wild symbol and although there is no separate scatter, random cards are labelled with a scatter label on each ‘spin’.

Each spin is referred to as a ‘deal’ in this game and if you can land three or more scatter-labelled cards on one deal you’ll win a number of free spins as follows:

Any winning hands landed while in the bonus round are subject to a 2x multiplier and it’s possible to activate more free deals by landing more scatter symbols while playing this phase.

As well as acting as the wild symbol in this game, any wins including the joker are doubled.

Any poker fans will appreciate this slightly quirky Net Ent offering – there’s no skill involved but it’s good to see genuine poker hands winning on an online slot.  It looks great as you would expect from this company.